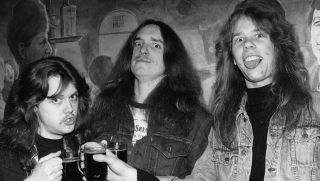 Lars Ulrich is more than just the drummer in Metallica. Since their inception in 1981, he’s been their hype man, mouthpiece and occasional whipping boy. And for a very brief moment, he was very nearly their singer.

According to the band’s original manager, Jon Zazula, this unlikely turn of events happened early on in the band’s career, before they even recorded their debut album Kill ’Em All.

And according to Zazula, James Hetfield was plagued by nerves at handling lead vocal duties. One proposed suggestion was to move Lars from the drum stool to the mic.

“Lars and I planned a lot of stuff,” Zazula told Metal Hammer in 2016. “But James wasn’t the most confident of singers. I don’t think he felt comfortable. At one point there was even talk of Lars becoming the frontman. For about five seconds.”

It wasn’t the only time that Hetfield expressed doubts in his own abilities. Before the band released Kill ’Em All, they asked John Bush of fellow San Francisco metal band Armored Saint if he wanted to become Metallica singer.

“I think that at the time, James was still uncertain whether he wanted to be the singer of the time,” recalled Bush in 2016. “Armored Saint was starting to do really well on the L.A. club circuit, and we were all friends — best of friends.

Metallica was doing well too, but I don't think anybody envisioned what was going to happen. For me to leave my band of friends to join some other band, it didn't make sense to me. I didn't want to do it. Certainly I was grateful and honoured, but I always say, 'I was not meant to be in Metallica. That was not my destiny.’”

Of course, Hetfield found his feet and went on to be not just Metallica frontman but one of the most iconic singers in the history of metal. Armored Saint never quite fulfilled their early promise, and Bush eventually joined Anthrax in the early 1990s – though the world got a taste of what could have been when he joined Metallica onstage to perform Metalli-classic The Four Horsemen in 2011.

And as for Lars Ulrich? He’s still the drummer and mouthpiece for Metallica. Which is just as well, as we can’t even begin to imagine what they would sound like with him singing.