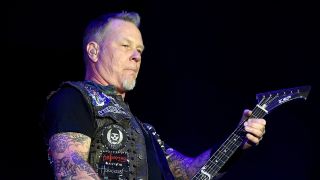 Last week, Metallica announced they are choosing to postpone their upcoming tour in Australia and New Zealand to allow frontman James Hetfield to begin a rehab programme.

The statement on the band’s website reads: “As most of you probably know, our brother James has been struggling with addiction on and off for many years. He has now, unfortunately, had to re-enter a treatment program to work on his recovery again.”

Hetfield famously entered rehab after the filming of 2004 documentary Some Kind of Monster, following a lengthy struggle with alcoholism. The ensuing 15 years saw him appear to be back on track, releasing a further two studio albums and keeping pace with Metallica’s relentless international touring schedule.

The news that Hetfield is struggling again is a stark reminder that our idols are only human, and of the ongoing pressures of being a successful professional musician.

The announcement prompted an outpouring of support on social media from fellow musicians, many of whom have faced their own battles with addiction. Tony Iommi and former Metallica bassist Ron McGovney have publicly sent well wishes and Jamey Jasta of Hatebreed and Lamb Of God’s Randy Blythe have credited Hetfield with helping them on their own journeys to recovery.

This demonstration of solidarity, honesty and support feels refreshing. It's a tangible shift away from addiction as a taboo subject to be kept under wraps or glorified in salacious rock biographies.

To sobriety coach and motivational speaker Kevin Sullivan, Hetfield's story is a familiar one. Sullivan also fell back into addiction after spending years committing to a sober lifestyle. He is now proudly in recovery and helps others struggling with addiction. He is confident things are changing for the music industry and that Hetfield’s return to rehab is a good sign.

“The music industry is already changing for the better," Sullivan tells Louder. "Hetfield and Metallica’s decision to make a public statement to end a tour and choose health over profits speaks volumes about the potential for change.

"Artists like Kurt Cobain, Amy Winehouse and Michael Jackson weren’t so lucky. Their tour buses kept rolling even though those close to them knew they were struggling. The industry needs to be willing to get a musician help even when it's not the best financial decision."

Yet money needs to be made and fans need to be catered to, so many major rock bands spend years out on the road. A big, loyal fan base is a beast that needs constant feeding. Plus, the fans are your community. You don’t want to let them down. It’s no wonder many musicians push on through burnout. After all, what’s the alternative?

Deciding to put on the emergency brake can’t have been an easy decision for Metallica or their management, but it sets a good example, says Sullivan. “The perceptions around addiction are changing due in large part to our changing conversations around mental health. As a society, we’re starting to accept that addiction is an issue of the mind and not a moral failing.”

And the spotlight is finally starting to shine on the world of music. The pressures of working in the industry are becoming more widely acknowledged and there is more support available than ever, with charities like Help Musicians UK and MusiCares in the US spearheading change.

Katerina Georgiou is a counsellor who specialises in supporting creatives, particularly musicians. She agrees the music industry is beginning to realise the scope of its mental health problem. “The industry culture has been, until now, unforgiving in some ways. But things are changing. More people are speaking out, much more awareness and more support beginning to be put in place.”

That openness is critical to moving forwards, says Georgiou, especially for musicians entering the industry who are particularly vulnerable. “It’s so easy to feel isolated and alone when you’re on that trajectory. But when you realise that it’s not actually an isolated experience, that’s a powerful thing. When you realise your peers – your bandmates, the roadies, the techs, the sound engineers – so many are going through similar processes. You need to lean on that network.”

With Hetfield, we are witnessing the network in action. His community giving him the space, understanding and support he needs to get better.

Kevin Sullivan can relate. “I’ve definitely been where Hetfield’s been,” he says. “I’m sure he feels like he’s disappointed his family, bandmates, and fans. He needs to accept the help he’s going to receive in rehab, and embrace that his brothers in Metallica loved him enough to stop the tour so he could get the help he needs.

"Hetfield owes it to his fans and those close to him to present the genius and great man he is when he’s sober."

Supporting our musicians to be the best they can be – what a radical thought.