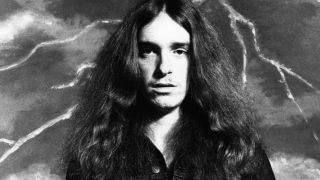 Metallica are considered the inventors of thrash metal, and their 30-year plus career has seen them crowned as genuine legends of rock. But bassist Cliff Burton’s contributions to the band’s first three albums – between 1983 and 1986 – helped set the unique tone and style that made Metallica stand out from the crowd.

There’s a definite charm in Metallica’s attempt to throw everything including the kitchen sink into this seven minute plus track from their first album, Kill ‘Em All. But there no denying the tune’s power, or the way Cliff Burton’s clever bass lines knit everything together with what appears to be nonchalant ease. The moments where he’s pushed way up in the mix only add to his four-string charm.

Originally released as the B-side to Creeping Death, and later featuring on 1998’s Garage Inc., the slow build to this interpretation of the Diamond Head song highlights Burton’s ability to create moods and paint pictures with his choice of bass lines. And once the pace picks up it’s Burton above all who locks down the groove that gives Metallica a surprising amount of swing for a band dealing in the currency of thrash.

Up to the point where the band all pile into the track and thrash hard, you might be lulled into a false sense of horror that this might actually be a Metallica ballad. The hard-edged riffs disavow you of that notion, eventually, but the quiet sections a least give you the chance to pay close attention to Burton’s perfectly adapted bass flurries. They alone are worth the six minutes and 57 seconds of listening time.

As any fool knows, any rock song featuring a great clunking bell is going to be great. But add in a hypnotic opening walking bass section and you know you’re onto a really great thing. From start to finish Burton gives this tune a lovely kind of fluiditythat, perhaps more than anything else, set Metallica apart from the rest of the thrash competition. Without Burton’s unique style, surely Metallica would have been way less alluring.

An intriguing bass intro that’s derived from the classical chorale prelude of Bach’s Come, Sweet Death doesn’t even hint at the fury that’s about to be unleashed when Damage Inc. finally flies off the handle. But once this particular runaway train is up and at ‘em there really is no place to hide. You can only imagine the state of Cliff’s right wrist keeping the bass pace up on this serious thrasher.

Cliff’s ability to develop an atmosphere is one of the reasons why Metallica’s success was so quickly earned. The opening section of instrumental The Call Of Ktulu shows him doing just that. The tune starts with polite guitars and delicate flecks of bass before moving into an oppressively brilliant groove that sees Burton moving us all over the place with some gripping fretwork. The kind of bass playing that makes you wish you could hear a mix without guitars.

The limited recording quality of this grinding tune from debut album Kill ‘Em All perhaps doesn’t do much justice to Kirk Hammett and James Hetfield’s crunching guitar intentions, but at least it gives us a chance to hear Burton’s remarkably intuitive bass pulsing. It’s the control he has over the instrument – never letting it rush when it needs to groove – that gives Metallica that undeniable X-factor.

The song that changed many people’s ideas about what metal could be, the tune that opened many an ear to thrash, and showed how this music could be fast and ferocious, yet still a melodic treat. Much of this is down to Cliff’s intuitive understanding of when to let his fingers wander and when to sit on the beat. He does both to supreme effect here, keeping everything motoring along nicely when the guitars take a breather, yet never letting then side down when everyone needs to be on point together.

A mid-paced instrumental headbanger filled with moments of Burton brilliance. His lines underpinning the song’s bridge set up a track that somehow manages to retain absolute intensity, while still slaying you with its irresistible melodic feel. Of course the quiet and slow, quasi medieval breakdown section also features some great Burton playing, but his contribution to the entire eight and a half minutes of Orion is exemplary.

Metallica may have invented thrash, but Cliff was the band’s secret sauce, the ingredient that helped them establish a new style of metal while still respecting the past. “Bass solo take one” introduces (Anesthesia) Pulling Teeth and this, another instrumental, is a perfect example of something old morphing into something new. Who would have thought the cliché of a protracted solo leading into a drum-led rhythmic climax could be so gripping? It could only happen in Cliff’s hands.