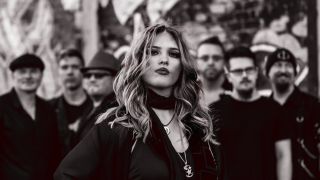 IO Earth have announced that they’ll be launching a new one-day progressive music festival in the Midlands for 2017.

Harmonix Fest will take place on Sunday, June 25, 2017 at the Robin 2 in Bilston. The evening event will include performances from the Prog Award-nominated Circuline, as well as France’s Telescope Road and Birmingham trio Oktopus. IO Earth are confirmed as the headliners and it’ll be new vocalist Rosanna Lefevre’s UK debut with the band. The British proggers have even hinted that they might preview some new material from their fourth studio album, due out at the end of 2017.

IO Earth co-founder Dave Cureton says: “We are so proud to be able to put on this event and we are sure the IO Earth family are going to love it.”

Advance tickets are on sale now.

Harmonix Fest is the latest in a string of dates for IO Earth in 2017. The band has also been confirmed to play at Cruise To The Edge on February 7-11 and Prog Sud in France on May 27.