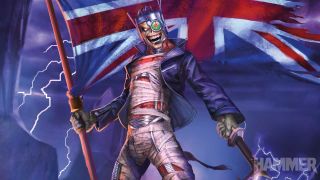 They’re coming home. And they’re bringing the best show metal’s ever seen with them. Please welcome Iron Maiden to the cover of our new issue.

We get a world exclusive, Access All Areas look inside the biggest Iron Maiden show ever. Rare songs! New props! All-new Eddies! It’s all here, and you won’t read it anywhere else!

In fact, the new issue is an Iron Maiden mega-pack, and comes with four free, exclusive Eddie postcards and a giant A1 poster – plus a free Heavy Of Metal Part 1 eBook featuring Maiden, Sabbath, Motörhead, Judas Priest and much, much more!

We also pay tribute to the amazing life and legacy of Vinnie Paul, whose passing devastated the metal world last month. In a special feature, we honour his career through some of his closest friends and peers.

But that’s not all that’s in this issue. We also delve inside the fire and the fury of this year’s epic Golden God Awards!

We also head back in time with Alice In Chains as the Seattle legends reflect on the legacy of their homeland – and the friends they’ve lost along the way.

The ace new Bury Tomorrow album has just landed, so we got brothers Dani and Dav to interview each other for the metalcore heroes’ most candid and personal feature yet.

We unite Dez Fafara and Wednesday 13 for a chinwag about why country music is metal as fuck.

Plus, we interview the rising synthwave movement’s most enigmatic character – the mysterious Gost.

We find out why Scarlxrd’s genre-splicing take on heavy music has got young metal fans losing their shit.

There’s also the final part of our four-part series on the story of thrash metal!

And there’s brand new interviews with Nightwish, Cannibal Corpse, Metal Allegiance, Pagan and much, much more.

Only in the new issue of Metal Hammer. Available to order from our online store now.