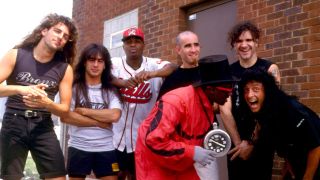 On the sliding scale of surreal rock collaborations, it isn’t quite up there with Motörhead and The Nolans. All the same, eyebrows were raised in both thrash-metal and hip-hop circles when word broke of the 1991 hook-up between the puerile, comic-obsessed party boys of Anthrax, and Chuck D and Flavor Flav of militant rap firebrands Public Enemy.

It was certainly news to Anthrax singer Joey Belladonna. “Scott Ian never even told me,” he says of his guitarist’s under-the-counter approach to Chuck D. “I remember we were rehearsing for Persistence Of Time when he played this riff, and I’m like: ‘Wow. What’s that? That’s pretty cool.’ Scott just says [shiftily]: ‘Ah, that’s just something we’re working on.’ Okay, no problem. But the next thing you know, Chuck D and Flav are in the studio. I was kinda in the dark with it all. That part of it did suck, but the outcome was great.”

By all accounts, Chuck D took some convincing. “I checked out my first heavy metal show back in 1987 and Anthrax was on it,” the rapper recalls in a video interview. “We got to know each other, and I named them in [original 1987 single] Bring The Noise ‘cos I thought they were cool. They had that hip-hop tip, that feel. When they wanted to make a heavy metal-type version, at first I was like, damn, I don’t know. But as time grew on we said we was with it. We said why not do something that will show both audiences that it’s the same thing: it’s attitude, speed, and still being hard without being soft.”

“Scott contacted Chuck, and one thing led to another,” says Belladonna. “I don’t know about rap, so I wouldn’t be the one to choreograph that. I’d never even heard Bring The Noise. I only heard it after.”

As a concept, the rap/rock/black/white cross-pollination of Bring The Noise wasn’t quite revolutionary. Five years earlier, Aerosmith and Run-DMC’s retooling of Walk This Way had been a crossover smash. Anthrax had already touched on rap-rock with 1987’s I’m The Man, and Ian insists it was genuine.

“We all enjoyed hip-hop, and that’s what we were listening to,” he told The Silver Tongue. “Public Enemy was our favourite band at that time. All we did, or Run-DMC and Aerosmith did, we were just dabbling and treading lightly in it. We weren’t a crossover group.”

At the turn of the decade, Anthrax and Public Enemy convened at Conway Studios in Hollywood to sniff each other out. “We hung a lot,” recalls Belladonna, “We’re rock’n’roll, they’re rap; we were bringing more amps, guitars and drums, and they’re doing more singing and the DJ thing, but that’s the only difference that I saw. Chuck D was cool, but he’s one of those guys where I didn’t want to bother him. Flav was more easy-going. He’d float from side-to-side, room-to-room. They wanted to know how we rolled. We had plenty of things in common.”

Not least a taste for schoolboy mayhem. “We had our moments,” Beladonna recalls. “There was a lot of horsing around. I remember Flav had this BB gun, and we all had paint guns, and when he saw those he’s like: ‘Man, I gotta get me one!’ We were doing some pretty good damage with those things, blasting them all over the place, splattering paint, breaking light-bulbs…”

The two bands even found themselves trading outfits. “Flav always loved my [Native American] headdress,” the Anthrax singer grins. “He thought it was blessed or something. He got a big kick out of it. I actually borrowed his clock necklace, his hat, his pants and his glasses. When I came out and joined him [wearing that], he was laughing so much he had a hard time singing. I laughed a lot with them, man. Just busting balls all night. But then talking about life, too.”

Musically speaking, Bring The Noise was hardly complicated. “The riff came in and we built it around the song,” Belladonna explains of the process. “You find a way to put the guitar in the midst of it all, then you put the drums and bass on top. That’s us doing all the instruments, but I didn’t sing anything. I can rap, but it’s not my favourite thing to do. I’d rather be singing notes and harmony. Spitting out a lot of words and rhyming, it’s like… let someone else do that. Chuck can spit out all those words, and he’s got that cool tone. On that song I was just Dj-ing. I used to mix records, do my own demos, play at colleges.”

From the moment they shot the video to Bring The Noise in downtown Chicago – inviting an equal split of black and white teenagers to play the crowd without violence erupting – the hybrid group knew they were onto something. “Nobody even had an idea that stuff could happen, and the next thing you know, we’re doing it,” says Belladonna. “It was a cool surprise. I loved that. That song was strong, it was heavy, it had a neat vibe, and it sure took off.”

But the industry was stumped. “MTV don’t know where to put Bring The Noise,” noted Chuck D in a video interview. “They don’t even know what to call it. They don’t know whether to call it heavy metal. They can’t call it rap. They don’t know whether to put it in the ‘hit’ block, the ‘street’ block, the ‘hard’ block. It’s all of the above. And the definitions are going past what they say they are in the industry. So you gotta be with the people. What the people want is what it’s gonna be.”

In July 1991 the people spoke, propelling the Anthrax version of Bring The Noise to No.14 in the UK and prompting a double-header tour that passed with remarkably little friction between fanbases. Given that, there’s a temptation to cast Bring The Noise as a song that helped break down interracial barriers. But Belladonna isn’t buying it. “We’d join each other on stage for Bring The Noise every night and it was awesome,” he says. “But as for people calling Bring The Noise a ‘social statement’… nah. I don’t see it as any statement whatsoever.”