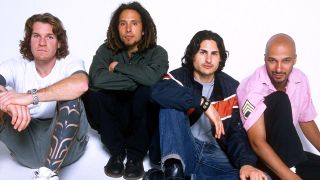 At the end of 2019, one of the most important and beloved bands of the last 25 years announced their reformation after an eight-year hiatus. Since that point there has been plenty of speculation as to where Rage Against The Machine would be playing, with every festival from Glastonbury to Download being linked to their return.

This week we found out their full plans; a US and European tour has been announced, with the band bringing Georgian hip-hop crew Run The Jewels in tow. This includes headlining dates at Coachella (AKA the Instagram Olympics), and the UK’s Reading and Leeds festivals – the latter’s announcement provoking outrage from many younger, less rock-inclined music fans.

How could a band that don’t wear bucket hats and Ben Sherman shirts and make music that sounds nothing like Paul Weller b-sides have the temerity to headline above the might of, erm, bedwetting dullards The Courteeners?

If you’re a long-time fan of Rage, playing these fests is a confusing move on their part: whilst they have headlined Reading and Leeds in the past, it feels like a misstep to position themselves in areas where they are surrounded by so little that is relevant to their core fanbase.

A willingness to reach a new audience is admirable, but it may just be that Rage are out of touch as to what those festivals have become. If the latter is true, then the choices made for this tour could embody the tightrope bands of Rage’s stature have to walk when they choose to reform.

Still, this tour feels timely: one of rock’s most openly political bands are returning at a point in time where political divisions and discourse have caused a poisonous chasm in our society.

This is a band that have shined a blindingly bright light on causes they passionately believe in from their inception; from shutting down the New York Stock Exchange to campaigning to overturn the death penalty of Mumia Abu-Jamal, Rage Against The Machine have only ever existed to upset the status quo. In that respect, there could hardly be more perfect a mouthpiece for the furious, the disenfranchised and voiceless right now.

Sadly, reformed bands rarely, if ever, come back in the same shape that we remember them. Bands as forward thinking and unique as At The Drive In and System Of A Down have spent the last decade stomping all over their own legacies with lazy records or phoned-in live performances. It’s a warning Rage must heed: no one wants to see them reduced to a Vegas-level nostalgia act.

If they want to avoid that fate then they’ll need to see exactly what they’re up against in 2020. Their upcoming festival shows will see them come into contact with some of the most genuinely exciting, politically-driven and forward-thinking artists around.

Artists like socially conscious punks Idles, whose maniacal stage show has gained them a ferocious following; artists like incendiary rapper Slowthai, whose Boris Johnson-decapitating antics caused the sort of outraged headlines in the tabloid press that Rage would surely have been proud of.

Both artists will be appearing on the same days at Reading and Leeds as Rage, and it’s their level of civil disobedience the world demands from Rage Against The Machine in 2020. A pipe-and-slippers, greatest hits jolly round the globe just isn’t going to cut it.

So, tentatively, welcome back Rage Against The Machine. If you’re arriving an older, wiser but still as angry and committed version with a point to prove and something to say, then we couldn’t be happier. But if you’re just here to annoy ‘Dark Fruits Twitter’ and pick up your pay check, I’m afraid that will not do.

Rage Against The Machine will be playing the UK's Reading and Leeds festival in August, and are touring across Europe and North America commencing this March.