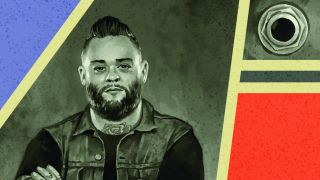 They Are Clever Bastards

“The thing that struck me first was that everything Refused did seemed really intellectual. I was 14 or 15 when I first heard The Shape Of Punk To Come. I’d been listening to punk for a while and I’d started to listen to hardcore a bit, but I was turned off because most of it was very ‘lowest common denominator’. It seemed like it was moving backwards. At first I thought it was a bit more progressive than the punk stuff I’d been into, but I quickly realised that it wasn’t. So when I saw what Refused were doing, it was just from this entirely different place. It wasn’t about posturing or being tough or some sort of bleak worldview. It was the essence of hardcore and that movement, but done intelligently.”

They Dress To Impress

“When I look back to shows I went to in the late 90s and early 2000s, the fashion and the way records sounded at that time have all aged terribly. I’m guilty of that myself! I wish I could listen to Alexisonfire’s first record, but I can’t! My interest in music wasn’t about fashion, but when I saw what Refused were doing I thought, ‘These guys are like The Clash! They’re a step ahead of everyone else…’ The way they presented themselves, dressing smart, that was another step away from that hardcore culture. Black jeans, black sweaters, black shirts – the presentation was an updated take on jazz.”

They Aren’t Afraid To Be Political

“Refused are a political punk rock band and that’s increasingly rare. Gallows played a festival that Refused were at two summers ago, and they were on the main stage and Dennis [Lyxzén] actually said that onstage: ‘We’re a political punk band from Sweden. I know that doesn’t really mean anything anymore.’ There aren’t new bands coming out having a lot of political ideas. It does seem like something from the past and that’s unfortunate. When Dennis sings, ‘I’ve got a bone to pick with capitalism – and a few to break’, that’s an amazing moment. It makes you want to destroy everything and it makes you want to change the world. I think that, for me, is the ultimate thing. That’s what it’s really all about: being super confrontational but with songs you want to sing along with.”

“The Shape Of Punk… is this huge record because it’s larger than life. They were trying to make a record that, like that English expression, does what it says on the tin! That title, too, it’s just about the most smug thing you could really do, but it really was the shape of punk to come. People weren’t ready for it and it took people a while to catch up with it. It’s something you can’t really recreate and bands have been trying for 20 years. It made a cultural shift and sent ripples through punk and hardcore and changed the way things were done. A lot of bands have tried to repeat what they did with that record, but they all fall way short of the mark. No one’s ever really recreated it. If you have any interest in heavy music and you don’t know this record, you’re fucking up!”

“I think the single they released recently is great and I’m sure the album will be, too. They’re up against themselves and their own legacy. That’s difficult to deal with. It’s something I deal with in Gallows, every show we play! The reality versus what people built it up to be can be very different things. So the new Refused album is not up against any other album made this year. It’s up against The Shape Of Punk To Come.”

Refused’s new album, Freedom, is out on June 29 via Epitaph