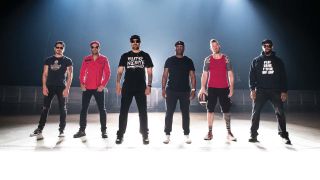 “Prophets Of Rage was brought to life because of the emergency of the political times. Prophets continue to be a band because we love playing together. It’s that simple.”

These are the words of former Rage Against The Machine and Audioslave guitarist Tom Morello, sitting at a table backstage at the cavernous Rockhal venue in southern Luxembourg, ahead of a headline performance tonight. The band are in the middle of a mammoth European festival run, but they’re also fitting in their own gigs where possible, including London’s Brixton Academy the week before. Not bad for a band that didn’t exist just over a year ago.

Morello formed Prophets Of Rage in May 2016 after reading a news article that stated Donald Trump ‘rages against the machine,’ which, as you’d expect, did not sit well with the revolution‑ready riff lord. “Oh hell no, that’s not what we had in mind,” he says.

Originally tweeting about the article with a “snarky comment”, he knew there was more he could do than sit and bask in the retweet glow. “We’ve got this insane arsenal of material that’s better suited to 2017 than it is to 1993, so how do we make that feel like something totally contemporary, is engaged in both the politics of the day and the rock’n’roll of the day?”

The answer was just a phone call away. Sending out the bat signal, long-time musical partners Tim Commerford and Brad Wilk instantly came aboard to join the cause. Soon after they were joined by Cypress Hill’s B-Real, and Public Enemy’s own DJ Lord and Chuck D. Having the godfather of hip-hop fronting one of the best rhythm sections in rock music is surely going to get your message out.

Sitting in his dressing room, poring over notebooks, Chuck D is a much more sedate and softly-spoken figure than the beast we’ll be seeing on stage in a few hours. Right now he’s making sure he rests his knees, ankles and Achilles. While he admits to originally having apprehensions about joining Prophets Of Rage due to his day job and real-life commitments, soon it became clear that there was no better place than here and no better time than now. “I’ve been making songs for thirty years, but I was really excited about taking on the challenge of doing Rage songs,” he admits in his cool-as-ice drawling baritone. But this isn’t just about playing Rage, Public Enemy or Cypress Hill covers like we see tonight – there’s a long-term plan, and a full‑length record is released this month.

“I’ve made fifteen or so records and this is the most collaborative record I’ve ever been a part of,” Morello says with an air of pride. “Everyone has the openness to share ideas, and the humility to be open to everyone else’s ideas.”

Throughout Morello’s musical career, one thing has remained a constant – the partnership with Wilk and Commerford. From Rage Against The Machine to Audioslave, the trio have written some of the biggest rock anthems of all time – something that isn’t lost on their new mouthpiece.

So how does this new incarnation of rock’n’roll’s triple threat compare to Audioslave?

“It’s being in a band with some of our biggest influences,” Morello says with a grin. “When Rage Against The Machine was forming, the two cassettes we listened to the most were the first Cypress Hill record and Soundgarden’s Badmotorfinger, and later on, miraculously, I work with both. What this has in common is playing with your heroes, then creating an environment where you’re able to be peers, and create something together that you aim to stand shoulder to shoulder with your best work.”

Time will tell if Prophets Of Rage’s debut album deserves to sit alongside Evil Empire or Out Of Exile, but the play-off of B-Real and Chuck D intertwined with RATM’s rhythm section is joyous to behold. And with the band tackling such topics as the Los Angeles homeless crisis in Living On The 110, drone warfare in Take Me Higher and the freedom of human beings in Legalize Me, it’s not just sloganeering masquerading as protest.

But is this all just a cynical ploy to cash in on the backlash against President Trump? Sure, the band formed before the election, but would we be seeing Prophets Of Rage bulldoze through Download, Hellfest and beyond if Hillary Clinton had won?

“Trump is uniquely horrendous and clownish,” Morello says, “but until everybody’s got enough to eat and everybody’s got a place to live, and there’s no more war, there’s going to be a reason to play these songs. When we solve all of those things, we’ll play love songs,” he says with a glimmer of humour in his voice, yet backed with a sense of fury.

“You don’t wish for catastrophes so you can be the ‘relevant, speaking to the armageddon’ band – you wish for a better world,” he asserts. “We’d have found twelve topics to write a record about. We didn’t ask for the train wreck in order to give us coverage. The train wreck happened, but we were on our way to fixing the world because the world won’t fix itself.”

“We’re certainly members of the resistance – sonic and cultural and political,” says Morello. “The record we made and these shows are a mission statement. We’re not sitting on the sidelines of history. If we’re going down then we’re going down swingin’.”

Prophets Of Rage’s self-titled album is released on September 15 via Caroline Records.

Make metal rage again: Why Prophets Of Rage are this year's most important band