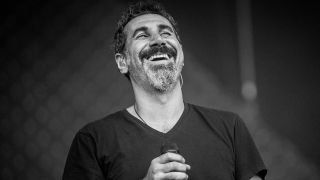 Come 2020, System Of A Down will have had a whopping 15 year gap in their catalogue, having last dropped new material back in 2005 with their Mezmerize and Hypnotize albums. To put it into perspective, that's longer than Tool's album hiatus before the highly anticipated Fear Inoculum dropped earlier this year.

Understandably, fans of the band are ravenous for new material.

Drummer John Dolmayan has said “I don’t know if new album will ever happen” and bassist Shavo Odadjian previously spoke out about the lack of new material, reporting that the band have a stockpile of material that could make it on to an album and commenting that he "didn't join a band to stop playing music".

Meanwhile, guitarist Daron Malakian has said it’s “not likely” that a new album from the band will happen anytime soon, with some of the material he originally composed for SOAD ending up on side-project Scars On Broadway's album Dictator in 2018.

Malakian has also suggested that Serj Tankian is to blame for lack of new music to which the vocalist responded at length.

However, with the band reuniting, touring Europe next year and even landing a headline spot at Download Festival, despite their lack of fresh material, fan interest has peaked.

But with the idea of SOAD collaborating in the studio again currently remaining out of the question, it's the unreleased tracks fans are keen to get hold of, with one such devotee starting a petition to get the unseen material released.

This very fan, George Roca, asked Tankian via his Patreon if he'd seen the petition and the vocalist responded.

"For the unreleased SOAD songs?" Tankian responded. "Yes. I am all for it. Convince everyone else."

Does this mean fans could finally get what they've been craving – some fresh new System Of A Down tunes? Perhaps, but don't hold your breath.

Dear @shavoodadjian, @johndolmayan_, and @daronmalakian We ask of you to please release the unreleased music of System of a Down. It’s probably the closest thing to new music we will get. @serjtankian is all for the music to be released. Now it is up to us as a community to convince you guys. The petition has over 1,650 signatures. Please come together and agree upon the release of the System of a Down unreleased songs from Mezmerize and Hypnotize as well as songs like Honey and Temper. Thank you for reading. You can help too by clicking the link in my bio and signing the petition! #SOAD #SerjTankian #ShavoOdadjian #JohnDolmayan #DaronMalakian #SOADTour2020 #UnreleasedSOADMusic #NewSOAD #Petition #Change #Toxicity #StealThisAlbum #Mezmerize #Hypnotize #SystemOfADown Serj Tankian Fan Page

System Of A Down 2020 European Tour Dates