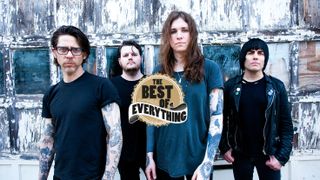 Just as Seattle was for grunge and the Bay Area was for thrash, Gainesville was – and remains – a breeding ground for punk. Hot Water Music and Less Than Jake are two of the city’s most famous exports, and a third comes in the form of Against Me!. Formed in 1997 by vocalist/guitarist Laura Jane Grace, the quartet have shape-shifted over the course of seven albums and various EPs, splits and so on. Following the release of their latest album Shape Shift With Me, we decided to have another nosey through their full-length endeavours.

We hate to be moody Margarets, but Against Me!’s latest LP regrettably plods to the back of the line. Shape Shift With Me is a good record but, well, it’s got the rest of the catalogue to compete with. Dead Rats, Rebecca, Norse Truth and Haunting, Haunted, Haunts are tight-fisted, shirts-off-and-whirling-them-in-the-air punk anthems – Rebecca’s irresistible guitar line and violent refrain, in particular – but the album’s first half sags due to a lack of tangible hooks and a guitar tone wetter than 5 Seconds Of Summer’s piss-rags. Boyfriend, for example, would shine on one of Weezer’s dodgy post-Red Album discs. But the standards set by Against Me’s previous effort, Transgender Dysphoria Blues, are heinously high and it’s cruel to have expected anything to scale them. Regardless of Shape Shift With Me’s pitfalls, it’s worth investigating for that mid-album blast and Inge Johansson’s beastly bass playing throughout.

After some old fans rejected New Wave and decided to listen exclusively to music recorded inside Coke cans, Against Me! beavered away at this little beauty. As was New Wave, White Crosses was released on Sire Records and produced by Butch Vig, knob-twiddler for Nirvana and the Smashing Pumpkins amidst others. The result? Massive, unashamed radio rock anthems. Because Of The Shame is the best Springsteen song that Springsteen never wrote, Bamboo Bones packs a chorus big enough to own a pair of comfort fit trousers and Ache With Me would be an unbeatable ballad had the band not released Two Coffins four years later. Vig’s production is cleaner than a freshly bathed baby and the record dips slightly with We’re Breaking Up and Rapid Decompression, but White Crosses is the album Against Me! wanted and needed to make. Plus, Bamboo Bones is amazing.

Distancing themselves from the feckless freakishness of debut Reinventing Axl Rose, Against Me! signed to Fat Wreck – sell outs! Waaah, etc – and polished their sound for As The Eternal Cowboy. The weirdly-placed piano in Sink, Florida, Sink works a treat, as does Grace’s staccato delivery through You Look Like I Need A Drink; this record’s a brief, scattershot blast of ideas that finish before you can properly digest them. A necessary step from Reinventing Axl Rose, As The Eternal Cowboy does away with that album’s intensity in favour of setting the foundations for future glories. Still a winner of a record, mind.

They’ll never make an album like this again, but no matter – we have Against Me! Is Reinventing Axl Rose forever; a disgusting, dingy keepsake. The band’s an anaemic backbone for Grace’s vocals, presented here in their harshest, most untrained form. The Politics Of Starving is a genuine spine-tingler thanks to Grace’s screams, but you’ve still got those amped-up, jump-on-the-bar-and-kick-a-big-bloke’s-drink-over gang vocals throughout the record, Pints Of Guinness Make You Strong’s folk-infused fuckery being a prime example. Jordan Kleeman’s Moog synthesiser on 8 Full Hours Of Sleep presents another side of the band and yeah, you read that right, a Moog synthesiser. Against Me! are never going back to this primitive form of punk again – that’d be regressive. But it’s bloody good, innit?

Expanding on As The Eternal Cowboy’s rock-based shenanigans but keeping that loose quality from Reinventing Axl Rose, Searching For A Former Clarity is a much deeper affair than its predecessors and a better record for it. Sure, it’s still brimming with bangers – Miami’s horns are ridiculous and Don’t Lose Touch is a certified arse-shaker – but for the most part, Searching For A Former Clarity has Against Me! exploring their eccentricities and owning them. Grace’s punk poetry is at its peak here, the title track’s heart-wrenching confessional and Unprotected Sex With Multiple Partners’ spasmodic ramblingbeing just two highlights. The choruses are here. The weirdness is here. The flitting between punk, folk, almost indie… it’s all mashed together in this aural masterclass.

Written as a concept album around the time of Grace coming out as transgender in 2012, Against Me!’s sixth full-length remains one of their defining statements. The gorgeous Two Coffins serves an ode to Grace’s daughter, Evelyn, while Black Me Out’s piss-laden, finger-slicing chorus works in the confines of a club as much as it does Reading Festival. Musically, Transgender Dysphoria Blues takes that hulking noise established on the past two albums and kicks Butch Vig into the bin, leaving Grace to produce. The result is a bare-bones, 10-song collection that firmly stays on Against Me!’s set path but throws a few sonic spanners in the works, most notably on the title track’s country-esque throwback to Pints Of Guinness Make You Strong – it also contains the most powerful line written by anybody, ever: “You’ve got no cunt in your strut.” Imagine pretending to not like this because you ‘prefer the early stuff’, eh? Madness.

It’s just perfect, isn’t it? New Wave has only 10 songs. That’s 33 minutes, 33 seconds of unadulterated bliss. Grace’s vocals are grittier than White Crosses’ takes and the band’s still very much set on crafting punk songs – just punk songs that should be played in stadiums. Stop! is cockier and catchier than anything 2016’s radio bands could hope to shit out, Borne On The FM Waves Of The Heart utilises Tegan Quin’s gorgeous guest vocals to their fullest capacity and Thrash Unreal’s going to be stuck in your head forever. It’s concisely compacted pop music in a rock format, middle fingers to the speakers and hooks ready to sink. Singer-songwriter Ben Lee loved the record so much, he did his own version, cleverly titled Ben Lee Sings Against Me! New Wave. Of the album, he said, “It is unmistakably a pop masterpiece.” He’s right there. The fact that a band can release this, White Crosses and Transgender Dysphoria Blues, one after the other, and not be headlining stadiums is sickening. It’s perverse. We’ve done Against Me! wrong and now’s the time to put it right. Buy a ticket, buy a shirt, buy New Wave and prepare yourself for one of the most consistently immaculate rock albums of the millennium.