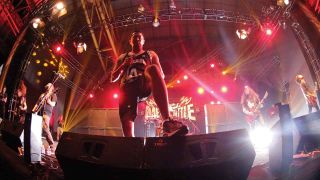 “Welcome back to Bandung!”

With a huge grin and arms open for a hug, Burgerkill guitarist Ebenz welcomes Metal Hammer back to the heart of the Indonesian metal scene. Nearly a decade since Ebenz first made contact with us, Burgerkill and their countless friends and fellow musicians are still firmly dedicated to telling the rest of the world about their unique community and the huge amounts of great music it produces, often against the logistical odds.

Much to our delight, we have been invited to spend a week at the heart of the scene in Bandung, taking in the third annual Wacken Metal Battle Indonesia along the way. With 10 bands competing for a slot on this year’s Wacken bill, it promises an intriguing snapshot of the Indonesian scene in 2019. There is also talk of visiting a volcano. We are very much up for this.

After (more or less) recovering from the mammoth journey from the UK to the world’s fourth most populous country, we launch into our first full day in 30˚ temperatures and t-shirt-ruining humidity by catching up with Ebenz and Burgerkill. The undisputed number one metal band in Indonesia, Ebenz’s crew enjoyed widespread acclaim for 2018’s Adamantine album and have been working and performing relentlessly since its release, including a brief dash to Europe where they recorded a new six-track EP with a full orchestra, revisiting old songs in a bombastic new style. Entitled Killchestra, it’s expected to emerge later this year, but Ebenz is thinking ahead to what happens next. Having led his band to several notable triumphs, from winning a Metal Hammer Golden God in 2013 to performing at Bloodstock and Wacken in 2015, he’s conscious of the responsibility he bears for sustaining an entire scene’s hopes.

“We are constantly thinking about what the next big idea will be,” he nods. “Obviously I want Burgerkill to be successful, but it’s about the whole scene too, showing that we can achieve things and get international recognition. We have so much talent here, you know?”

As if to prove his point, we spend the rest of the day at a Burgerkill fan club gathering in the centre of Bandung, watching documentary footage of the band’s adventures in Europe and a recent summer camp-cum-festival held for the band’s fans, the Begundal. Supported by a loyal and dedicated network of bands, fans and friends, the Indonesian metal scene is clearly becoming more focused and better organised with every passing year.

Meanwhile, Burgerkill will celebrate their 25th anniversary in 2020. When they formed, back in the pre-internet days when metal was a comparatively unfamiliar genre to most Indonesian ears, Ebenz and his friends were homeless, sleeping on the streets of their Ujungberung suburb, poring over dusty, second-hand copies of European metal mags found in local bookstores and wistfully imagining a full-blown heavy metal scene of their own.

“We’ve definitely come a long way,” Ebenz notes, with a shrug. “The big change is that bands from Indonesia can dream a bit bigger now. Maybe anything is possible.”

This year’s Wacken Metal Battle Indonesia is taking place an hour’s drive outside Bandung, in a purpose-built outdoor venue, overlooked by an elegant, imposing mosque. Obtaining permits for live shows is just one of the ongoing logistical challenges faced by metal bands in Indonesia, exorbitant costs and an omnipresent whiff of corruption ensuring that every gig that does take place has been organised meticulously under the constant threat of cancellation. Thankfully, everything seems to be going smoothly, even if it is hot enough to boil an Englishman in his own brain fluid.

We gather at a hotel to meet the bands that will be performing tomorrow. From death metal diehards Carnivored, Hellcrust and Kaluman through to hardcore mob Taring, psychedelic alt-metallers Katzenmeister and atmospheric metalcore crew Kapital, this year’s line-up is laudably diverse. As Ebenz reaffirms, it’s impossible to quantify what this opportunity means to every last one of these musicians, some of whom have had to travel 500 miles to get here, continually impeded by Indonesia’s challenging topography and frankly insane levels of traffic.

“There are bands from here in West Java, but also bands from Sumatra and Borneo,” he states. “Paint In Black are from Lampung, Sumatra, and they drove 12 hours to be here. That’s just the way it is. Welcome to Indonesia! Ha ha!”

For all the challenges they face, the Indonesians have definitely got their shit together when it comes to putting on a metal show. Wacken Metal Battle Indonesia 2019 proves to be a flawless, professional operation: remarkably, for any festival anywhere, all 10 bands hit the stage on schedule and are blessed with excellent front-of-house sound.

Crowds in Indonesia would probably be a lot rowdier if it was legal to drink alcohol at events like this, but even at 11am there are hundreds arriving, most sporting merch from homegrown bands. The first couple of bands suffer a little from playing so early, but the atmosphere and intensity of the fans’ enthusiasm rapidly builds up steam. By the time Bandung metallic hardcore brutes Taring hit the stage, the venue is almost consumed by a giant circle pit. Want more proof that heavy music is an international language? Here it is.

The standard is amazingly high. From Over Power’s thrilling grindcore-with-added-Sabbath to Belantara’s incendiary crusty sludgecore, any notion that metal from this part of the world is lagging behind the West is obliterated. To our ears, the most spine-tingling moment comes when metalcore crew Kapital deftly incorporate the sape, a traditional Indonesian instrument, into their thunderous anthems. There’s something deliciously alien about this sound, as it collides with the familiar squall of ultra-modern, brutal riffing.

As night falls, the battle comes to an end. A jury of local metal luminaries, and one slightly confused Dutch booking agent, decree that Taring are the band of the day, not least due to the absolute chaos that erupted during their set. For Hammer’s money, they were definitely the one band that seemed wholly ready to take on a field full of drunk Germans at 2am. Justice has been done. Congratulations, chaps!

A posse has gathered at Ebenz’s house. We’re off to see a volcano. Among our crew are Addy, frontman with local metal veterans Forgotten, and his wife Karin, one of a core group of organisers behind all the major metal events in Bandung. They speed off on dirt bikes while we opt for a slightly less terrifying ride into the mountains in Ebenz’s car. Several hours of mind-bending ups and downs and heart-stopping close calls with other vehicles later, we arrive at the top of Tangkuban Perahu. The locals start putting on hoodies because the temperature up here is… well, it’s still pretty fucking warm by UK standards, but we’ll let it slide because the view across the volcano’s vast, steaming crater is spectacular. Ebenz and Addy grin at our stunned reactions. Indonesia is an extraordinary place, with dozens of live volcanoes, the legendary Krakatoa included. Earthquakes and tsunamis are a more real and present danger here than virtually anywhere in the world. The fearsome power of Mother Nature is all around us. It’s pretty fucking metal.

After another trundle through the mountains, we return to Bandung for a celebratory Korean feast courtesy of Wacken Metal Battle winners Taring. With a slot at Wacken confirmed, you would struggle to find a happier group of musicians on the planet right now. Think on, entitled European folk!

Today’s a big day for metal in Indonesia. Thanks to tireless community efforts spearheaded by local media guru, author and ex-Burgerkill member Kimung, the local culture museum, Museum Kota Bandung, has awarded the metal scene a permanent exhibition documenting its history. Today, we celebrate its opening. The walls are adorned with candid photos of Burgerkill, Indonesian death metal legends Jasad and Wacken Metal Battle winners Beside (2017) and Down For Life (2018) taken during their European exploits.

A vast array of artefacts is on display, ranging from fanzines from the scene’s very early days through to more recent academic works dedicated to the birth and evolution of heavy music in Indonesia. Throw in a performance from local unplugged punk rockers Karinding Keos, who play rowdy songs using only traditional instruments and percussion, and this is the ultimate experience for Indonesian metal nerds.

As part of this event, Metal Hammer takes part in a discussion about the future of the Indonesian metal scene, how best to engage with the wider metal world and, perhaps most importantly, how Indonesian bands can create a reliable infrastructure for touring bands, both native and foreign. In truth, there are no easy answers to these questions, but the fact that Ebenz and his friends are so passionate about networking with people from around the world says a lot about their prospects.

The rest of the day is dedicated to Extreme Moshpit TV, Ebenz’s ongoing YouTube channel. Hammer takes part in a genuinely incomprehensible segment wherein Ebenz endeavours to interview us in English, while his friends interrupt in Indonesian. No one is entirely sure what’s going on, but we end up pissing ourselves laughing. Taring drummer Gebeg plays Helloween’s Future World on guitar and gets the words wrong. It’s hilarious. Maybe you had to be there.

Today, we’re heading back into the mountains to a secret location. Off the authority’s radar and hidden away from the road, you won’t find Klub Racun on any maps, online or otherwise. Housed in a sturdy but primitive shed, hidden under a giant canvas medical tent, this is the DIY venue to end them all. Thanks to a pact with the neighbours involving a 5pm sonic curfew, local punk and metal bands are able to put gigs on here regularly, without the need for the usual arduous pursuit of an official permit. It’s ridiculously sweaty inside the venue. A sign on the wall reads: ‘Welcome under the radar – Here there are: No Sexists, No Homophobes, No Racists, No Xenophobes, No Fascists.’

As brutecore quartet Konfliktion and grindcore upstarts InHell tear through brief but exhilarating sets, with condensation dripping from the ceiling throughout, it’s hard not to conclude that this is one of the coolest things we have ever seen. The metal scenes in Europe and the US are cool enough, of course, but are they secret-grindcore-show-in-the-mountains cool? No. Definitely not.

After a final and surprisingly delicious meal of freshly made snake soup (no, really!), it’s time to say goodbye to the world’s friendliest and most passionate metal scene. We’ll all be hearing a lot more from them.

“We think we’ve got something special here and we just want the world to hear about it,” Ebenz concludes as we depart. “We’re like a big family here. And metal is one big family, isn’t it?”