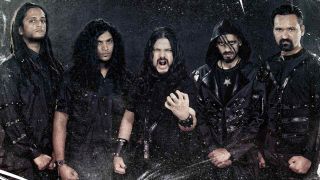 When you’re a band from a country not known for its vibrant metal scene, it can be a struggle to keep your dreams alive on the big stage. For India’s biggest name in metal, Demonic Resurrection frontman and mastermind Demonstealer (real name Sahil Makhija) his two decades in the metal scene have been a rollercoaster of success and downfalls – the former coming most recently when his band played a triumphant set at Bloodstock last summer. We asked the Mumbai mastermind what it takes to break out from the confines of an up-and-coming metal realm.

How did you first get into metal?

Demonstealer: “In sixth grade, a friend played me Iron Maiden’s self-titled album. Running Free blew me away and I tried my best to comprehend what was going on in Phantom Of The Opera. It was quickly forgotten as I got more into techno and pop music over the next two years, until my school friends told me to stop listening to ‘pussy music’ and they gave me some Maiden and Metallica to try. This time, it really stuck with me and there was no going back – it’s been about 20 years now.”

What did your family think of your growing love for heavy music?

"My mother loved music, she listened to everything from rock and roll to soul and pop, her vinyl and CD collection was huge and I grew up around a lot of English pop and rock from the 1960s-onwards. My mum and dad took me to my first concert in 1994, which was Bon Jovi. When I got into metal, they had no issue with it even though they didn’t really understand it; they looked at it as their parents looked at rock music when they were growing up. Sadly, my mother lost her hearing before I started making music so she’s never had a chance to hear my music.”

What was on offer for metal fans in Mumbai at the time?

“When I started becoming part of the scene, in Mumbai we had a yearly rock concert called Independence Rock at a lovely venue in the city, Rang Bhavan, where about 5000 people would gather. Most bands played covers and the audience didn’t really want to hear anything else. We had live nights at the local club Razz Rhino every Thursday night where bands could book themselves and get 50% share of the gate entry. We had a rock magazine called Rock Street Journal from Delhi, plus we had a few music stores that stocked metal CDs and bootleg T-shirts, but at that time we had no idea what original merch even looked like.”

How did Demonic Resurrection first come together?

“As soon as I finished school and picked up the guitar, I started writing music. In 1999, I’d decided to form a band and picked out the name Demonic Resurrection. I hunted for musicians for two years, namely a drummer, without any luck. In January 2000, I got fed up and was ready to get up on stage with my computer and Fruity Loops and play a show – by that I mean my actual desktop PC with that big television-size monitor. However, as fate would have it, I met an old school friend, Prashant Shah, who he agreed to play guitar with me. He brought along another guitarist, Aditya Mehta, and drummer Yash Pathak, then I asked a non-metalhead friend of mine, Farhad, to play keys.”

How did the early years of DR go down?

“It was completely DIY because there was nothing. We organised our own shows at Razz Rhino, I learned to record music at home and recorded our first album in my bedroom. For artwork, I learned how to use software, manually burn CD copies and photocopied artwork with the help of my mum. We were 16 at the time so I didn’t look at it as a business, but I always made sure we didn’t lose money. Luckily, I had a drum kit at my house so we could rehearse without paying for a jam room, which didn’t exist at the time. We used the internet to spread our music – forums and everything that was available to us. We were one of the few bands with merch, most others didn’t even have proper logos.”

What else did you juggle around DR?

“I worked in a recording studio learning on the job for a while, then moved on as an artist relations manager for a musical instrument importer. I’ve kept myself busy with side projects, an old school humour death metal band Reptilian Death, my comedy rock/metal band Workshop and, finally, my solo work as Demonstealer. Since there was nobody else to do things, I’ve been involved in most aspects of the scene. There were no record labels so I formed Demonstealer Records to release my own music and many other local bands, I even licensed international albums from bands like Behemoth and Dimmu Borgir. I started a small festival, Resurrection, which ran for six years and produced a free extreme metal magazine, The Resurrection Zine. I also offered a consultancy service teaching bands about the music business and I’ve written for magazines like Rolling Stone India and Rock Street Journal.”

“Sustainability is the biggest issue for the scene now. There are too many bands, every metal kid is in a band and wants people at his show but he’s not at anyone else’s gig. The number of fans isn’t growing in the same way the number of bands and shows are growing. Even if bands can’t make a living playing music, it needs to stop draining money from their day jobs so it makes sense to do it long term. Otherwise, like most bands from the past, members eventually vanish.”

What's been the hardest thing about the last 18 years in the band?

“Booking a European tour. I’ve tried for eight years but every tour that comes our way is not affordable. We play a style of music that isn’t underground enough like old school thrash, but also isn’t mainstream enough like modern prog metal. We’re in a weird space where we can’t find bands that fit well with us.”

You've hinted heavily that your musical career may be drawing to a close. Why?

“The inability to tour and the constant rejection has worn me down. I’ve written to almost every metal festival and record label in the UK and Europe, but I’ve had nothing but silence or rejection. The worst part is I’ve asked for nothing but a chance, I’ve told labels that I’ll work day and night to promote it, I’ll invest money, make videos and content. I’ve had some help with the UK, we found a good agent who helped us fly over there in 2014 and also last year. However, you can’t just do one UK tour every three years and hope to get somewhere, you have to tour constantly.”

What would make you reconsider?

“Maybe if there’s someone who is capable and willing to manage the band, or if someone can get us out on the road in Europe without me having to sell a kidney. Right now, anything we do involves the cost of session members, it was easier to climb the mountain when there were band members who were on board but now it’s even harder.”

So what’s on your agenda in the coming months?

“I’ve got 340,000 subscribers on my YouTube channel Headbanger’s Kitchen who want to see Keto recipes, so I’ll be busy keeping those coming with the channel. I’m also hoping I can sell out all my existing CDs and merch from both Demonstealer and Demonic Resurrection.”

Head to www.facebook.com/demonicresurrection for the latest news on the band. Demonstealer appears at the World Metal Congress this weekend. Find out more at www.worldmetalcongress.org