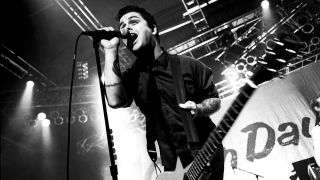 2020 marks the 20th anniversary of Green Day’s sixth studio album, Warning. But the milestone is unlikely to be met with great fanfare. Perhaps it might illicit an indifferent shrug at best.

While it didn’t exactly bomb – lead single Minority spent over a month at the top of the Billboard Modern Rock chart and it received ‘generally favourable reviews’ – their first release this side of the millennium was a critical and commercial low point for the band.

The album saw the gain turned down a notch on their distortion pedals, coupled with the increasing use of acoustic guitars. Billie Joe Armstrong’s solos were substituted at various points for harmonica, plucked mandolin and – perhaps most jarring of all – a screaming sax break more typically at home on a Bruce Springsteen album. It was a deeply uncool proposition for a punk band at the turn of the millennium, when the angst and attack of nu metal was beginning to dominate the rock charts.

For many fans, Warning will forever be remembered as the band’s first true stinker – the one where they lost their fire and went a bit soft. For others, the verdict was even more damning: it wasn’t a bad record, it was just ‘OK’. Either narrative pitches Warning as a momentary blip in an otherwise spotless catalogue up to that point. (The merits of 2012’s ¡Uno!, ¡Dos!, ¡Tré! trilogy are for another debate.)

Warning’s sorry fate was only cemented by the globe-conquering, politically-charged magnum opus that followed. 2004’s American Idiot was dubbed a triumphant ‘return to form’... or in other words, ‘their last album was a bit shit’. Evidently 16 million fans agreed. But was Warning really that bad?

Musically, the acoustically-driven Warning revealed a love of British rock icons from Elvis Costello to The Kinks. Lyrically, it demonstrated a political awakening that pre-dates the post-9/11 paranoia of its successor. Far from a momentary mellowing of spirit, a closer listen reveals how Warning actually sowed the seeds for the sharp social critique of American Idiot. But viewed entirely on its own merits, Warning is a solid, overlooked collection of songs from a band finally transcending the genre from whence it came.

It’s the classic taunt levied on many a band that’s had to the audacity to stick around long enough to grow up: ‘they’ve lost their edge’ (see Pixies, Idlewild, Oasis, [insert name of your favourite ageing band here]).

But rather than a blunting of Green Day’s power, Warning was a coming of age, a progression from adolescent frustration to a world-weary adulthood. ‘Maturing’ is often a byword for ‘going boring’ and, sure, it didn’t rock as hard as their snappy youthful efforts that won millions over in the first place.

But the change of pace wasn’t a sign of losing stamina. The rhythm section of Mike Dirnt and Tre Cool remained as tight as ever, while paradoxically assuming a looseness that suited them rather well. What’s more, taking their foot off the gas a little allowed them to explore a wider palette of sounds and textures. It might be a bit of stretch to call Warning their London Calling, but it was certainly a concerted attempt to explore new territory.

A key gripe seemed to be that it didn’t sound like Dookie. But what would be the point of that? There’s only so many times you can repeat the same trick before falling into self-parody – a fate Green Day were already in danger of by this point.

Album number four, Insomniac was essentially Dookie 2.0, and 1997’s Nimrod – though stuffed with great songwriting – would’ve been, too, if not for its two stylistic outliers: the ska-infused dressing-up ditty, King For A Day, and Good Riddance (Time of Your Life). The latter’s stripped-back acoustic ballad was something of a Year Zero for the band, providing their biggest crossover hit. Once Armstrong had exposed himself so completely, they could hardly just put the suit back on and return to business with another straight-up punk album.

That said, Warning – for the most part – was hardly a radical departure. The song structures are essentially what you’d expect from Green Day; they’re just enhanced with the subtle introduction of new textures, often leaning to a more folky sound. Tellingly, Warning was the first album that the band entirely self-produced, signalling the desire to take creative control and explore fresh avenues. But, most importantly, the songwriting remained razor sharp throughout.

Green Day’s melodic brand of three-chord pop punk is obviously hugely indebted to their fellow countrymen the Ramones, and Green Day are as American as John Wayne and pumpkin pie. But listen again to Warning and you’ll witness a clear love of British rock icons. The title track’s revolving riff and walking bass line borrow liberally from The Kinks’ Picture Book; Church On Sunday is essentially Oliver’s Army played a bit faster; and both Minority and Jackass have echoes of The Clash. It’s worthy of note that The Kinks, Clash and Costello are all artists who have stepped beyond the narrow confines of their original scenes to become great rock acts full-stop.

Elsewhere, Waiting breathes new fire into Petula Clark’s Downtown to create one of their finest overlooked singles. Closer Macy’s Day Parade is another underrated gem in Green Day’s catalogue. Emotional without being sappy; simple but genuinely affecting in its delivery, it takes the classic Stand By Me chord progression and shows Armstrong’s growing maturity and grasp of melody. It’s a clear precursor to Wake Me Up When September Ends.

Armstrong’s bratty persona and snotty delivery have always belied his lyrical dexterity. He’s far more poetic than often given credit for. Routinely abstract and oblique, his turns of phrase nonetheless produce some colourful imagery that goes way beyond his contemporaries Blink 182’s typical fart gags. Bille Joe treats us to ‘economy-sized dreams of hope’ and bleeding mascara ‘leaving traces of my mistakes’.

The album’s centre-piece, Misery, is the greatest detour from Green Day’s well-trodden path, and as a result stands up as their finest oddball moment ever committed to tape. Ironically, by restricting themselves to just two chords (rather than the usual luxurious three) and slowing the pace right down, it actually frees them up to deviate further off the map. Musically, it’s a gypsy folk punk road trip that journeys through a range of European and Latin American traditional styles, complete with flourishes of twangy guitars, Mariachi horns, mandolin and strings. It’s also an opportunity for drummer Tre Cool to grandstand a mean accordion.

All of that might sound awful on paper – and yes, it’s totally ridiculous – but it’s the best song Gogol Bordello have never written. It’s the kind of track that gets people going, ‘What the...? Was that really Green Day?’ It’s certainly not playing safe.

By Billie Joe’s own admission, Warning was the point where he started to become more politically aware. His lyrics had often broached ideas of alienation and disenfranchisement on a personal level, but now the discontent became more overtly political and socially conscious.

No longer a frustrated youth kicking out at the world, Warning saw Billie Joe begin to assume of the role of reluctant figurehead for the dispossessed. On Minority he rants ‘down with the moral majority’ and pledges his allegiance to the underworld. Meanwhile, the opening title track conjures up imagery of an Orwellian government controlling its hapless populace with endless menial commands. Railing against the powers that be, he offers a choice to either ‘live without warning’ or ‘shut up and be a victim of authority’.

Ok, so it’s hardly Rage Against The Machine in its nuance or Public Enemy in its shock value. But it marks a shift in outlook, Armstrong lifting his gaze from his own naval to observe and comment upon the wider world around him. By no means an out-and-out political record in its entirety (much of it feels optimistic in tone), Warning set Armstrong upon a path lyrically that would ultimately prove fertile ground in the years to come.

Warning may not be the first point of entry into Green Day’s catalogue for the uninitiated – that honour should always belong to Dookie. And, yes, it was American Idiot that undoubtedly injected new purpose into a flailing career, winning them an entire generation of new fans.

But in reality, each ensuing album that followed Dookie’s breakout success offered diminished commercial returns. In this sense, Warning wasn’t an outlier, but rather a continuation of that trend. It was, however, their first proper attempt to create a new thematic sound across an album, rather than a token novelty track. Some may have found its folk leanings to not be ‘punk’ enough (whatever that means), but it helped to set the template for later acts like Frank Turner who’ve gone on to enjoy success with a similar sound. Warning should stand proud in Green Day’s canon and not cower in the corner as an embarrassment best forgotten.

While all four of Warning’s singles made it onto 2001’s International Superhits!, only Warning and Minority survived for 2017’s Greatest Hits: God’s Favorite Band. The band do themselves an injustice there, erasing two fine cuts from their retrospective. The album has had something of a reappraisal in the years since its release, yet Warning won’t ever find itself in the ‘all time best album lists’, nor will it get the Broadway treatment afforded to its successor.

But it’s no stinker. And far from just a necessary step in the band’s progression, it’s a solid set in its own right. It certainly deserves another outing, whether you’re dusting off that underplayed CD or discovering it for the first time. Forget your preconceptions of what a Green Day album ‘should’ sound like, and just enjoy a fine example of song craft from a band with the confidence to finally break free from the scene that made them.