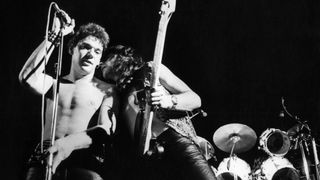 Between 1975 and 1978, the nascent Iron Maiden earned their spurs on London’s pub circuit. But with punk raging, getting noticed by record labels was easier said than done – at least it was until a DJ named Neal Kay opened a new club in the wilds of North London.

Neal Kay (DJ/founder, Heavy Metal Soundhouse): Punk was the prevalent music in 1978, but since 1975 I’d been building up a small venue in Kingsbury as a heavy metal discotheque. It was known as The Bandwagon in the Prince Of Wales pub, but I re-christened it The Heavy Metal Soundhouse. The main room held about 700 people, and we had a fuckin’ ginormous sound system. I kept badgering Geoff Barton atSounds to come down, because I knew it was unique, and a great story. In the end he came.

Geoff Barton (writing in Sounds, august 1978): The decor resembles Dodge City, American B-movie Western style but, with alternating flashing lights/darkness, your eyes never really adjust to notice that much detail. The Bandwagon and the music that’s played there is very much a present day reality, no matter what the fashion pundits might tell you. And to me, and a goodly number of other punters, it’s like a little bit of heaven on Earth.

Alan Lewis (editor, Sounds): I coined NWOBHM (New Wave Of British Heavy Metal) as a front-page headline. But it was sort of an in-joke. We were always hailing something or other as ‘The New Wave Of…’

Neal Kay: After Barton’s feature, bands from all over the world started sending us their tapes to play. People started travelling to The Soundhouse from all over the country, and record companies started bringing their artists along to meet the kids. We were getting daily newspapers coming down, film crews – we loaned our biker contingent to The Who for Quadrophenia. Early in January of 1979, a young guy came up to the stage and pressed this demo cassette of his band, Iron Maiden, into my hands. He said: “Do me a favour mate. Take this ’ome and give it a listen, willya?” I said: “Yeah, you and about five million others.” But I took it home, put it on and it was electrifying. Light years ahead of anything I’d heard. It had been recorded a few days earlier at Spaceward Studios in Cambridge. The next night, I played it at The Soundhouse, and everyone went mad.

Steve Harris: That was the thing that started people getting interested in the band. I mean, we did the demo tape basically to get work. We didn’t dream of it being placed anywhere or anything like that.

Neal Kay: Geoff Barton had started a Heavy Metal Soundhouse chart in Sounds which I compiled every week based on the requests I was getting, and Prowler from the demo went to number one. I became determined to help make Maiden happen. So I launched myself on a sales tour around the industry with that demo tape. I got laughed out of everyone’s door. Mick Parker, manager of The Music Machine in Camden, phoned me. He’d been following the Soundhouse story in the papers, and asked would I like to put shows on with bands of my choice once a week? That was a huge opportunity because the hardest thing was to get the music business to come out of London.

Ashley Goodall (A&R man, EMI Records): I was new at EMI, and I grew up loving hard progressive rock, so my instinct was to look for bands from that area. It quickly became obvious to me that it wasn’t punk bands that were pulling crowds, but heavy rock groups. And hardly any A&R guys were interested in it. The first time I saw Maiden was at The Swan in Hammersmith [March 10, 1979]. I went in and it was like a football crowd. I thought: “Woah, hang on, this is real. These are happening.” After that I started going to see them more often to keep track of them. Maiden seemed more together than the other metal bands I was seeing. They were better organised, had a more vociferous following, the tapes, the T-shirts, the identity – all the bits seemed to be in place.

Neal Kay: Probably the most significant gig I did at The Music Machine was when I put Samson, Iron Maiden and Angel Witch on [May 8, 1979], as the first gig of a tour, called The Heavy Metal Crusade.

Geoff Barton: I was reminded of the first Black Sabbath album being played through a cement mixer. The band, dressed in cheesecloth shirts and loon pants, tossed their long hair, pouted, posed and punched their fists into the air after each agonising guitar solo.

Steve ‘Loopy’ Newhouse: They played for about half an hour, maybe more… then it was our turn.

Bruce Dickinson (vocalist, Samson): It was obvious to me that they were streets ahead of everybody else on the bill. I got goosebumps watching them, it gave me the same feeling I got as a kid listening to Deep Purple In Rock for the first time. I remember thinking: “Wow, this is like Purple for the 80s.”

Geoff Barton: During Samson’s performance you got dry ice, flashbombs, dry ice, showers of confetti, dry ice, fireworks, dry ice, clouds of multi-coloured smoke and even some dry ice into the bargain.

Steve ‘Loopy’ Newhouse: Bruce Dickinson, a young man with big ideas, was the highlight of Samson’s set. We watched him climb all over the PA, jump off and do barrel rolls. He was the most electric frontman we’d ever seen. The rest of the band noticed too. I stood next to Steve Harris, who had Dave Murray to his right, and the two of them chatted away through the Samson set. In hindsight, I guess we can all assume what about.

Ashley Goodall: By about June I had decided I really wanted to sign Maiden, but it wasn’t an easy sell because EMI didn’t have much metal on their books.

Rod Smallwood: When I first saw Maiden [mid-July 1979], they played without Paul Di’Anno who’d been arrested for carrying a work knife in his pocket. There was just Steve, Dave Murray and the old drummer Doug Sampson, and I just remember thinking I’d never seen anybody look the audience in the eye with the same intent as they had on stage, and how much they were obviously into it, and was probably the most real band I’d ever seen.

Ashley Goodall: The idea emerged of doing a compilation album [Metal For Muthas] of this new wave. I thought it would be a really good way to sum up what was going on. I brought in the bands to do some tracks [October 1979] in our demo studio at EMI. Incorporating Maiden into the Metal For Muthas album, I think, gave me a relationship with them that other record companies didn’t have. Of course, as soon as one company gets interested, all the others start piling in. That became very obvious at The Marquee showcase gig [Oct 19, 1979] where Chrysalis and others turned up. Rod Smallwood was using our interest to get other companies to look at them.

Rod Smallwood: There was a massive queue outside and it was obviously very vibrant, very happening. It was the first time we’d brought down A&R people, and it was so packed they could hardly see.

Ashley Goodall: But we were pretty close to Maiden by this stage, and after the Marquee show the real negotiations started.

Rod Smallwood: We didn’t sign the management contract until after I’d done the recording deal with EMI [Dec 15, 1979] and the publishing deal with Zomba, because I wanted to make sure that these were people I could work with long-term.

Ashley Goodall: Rod insisted on a three album commitment from EMI because he wanted the band to be a longer term project. We went into the studio to do their first single, Running Free, just before Christmas 1979. We also did the album pretty fast, less than a month, with Will Malone producing, in Kingsway Studios. Later in the month we released Metal For Muthas which turned into a big deal for EMI. It shipped out 20,000, a huge amount for a compilation of unknown artists. It went to No.12 in the chart which completely took EMI by surprise. Next thing we knew, Maiden were on Top Of The Pops [Feb 22, 1980]. That was the start of people beginning to know who Iron Maiden were.

Rod Smallwood: The first album came out in February 1980 and debuted on the UK chart at number four. It ended up doing about 350,000 worldwide, which isn’t bad for a group that was turned down by CBS because the songs weren’t strong enough.

Steve Harris: The plan at the start was just to get a deal and tour, there were no thoughts of world domination… to go straight into the charts at number four was way beyond our expectations, it was outrageous really.