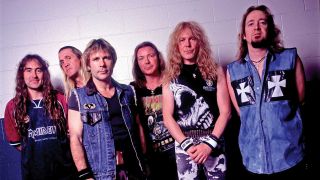 It might be hard to imagine now, but Iron Maiden were struggling at the end of the 1990s. Today, the UK’s undisputed kings of heavy metal casually stalk the globe with vast, eye-busting stage productions, at the peak of their powers and more successful than ever.

But after two good-but-not-great albums with vocalist Blaze Bayley, who replaced Bruce Dickinson back in 1994, Maiden were visibly battling the law of diminishing returns, playing in smaller venues to smaller crowds in many parts of the world; their status as metal’s unassailable standard bearers was now in question.

But in 1999, the news that Blaze was gone and Bruce and guitarist Adrian Smith (who had quit Maiden in 1990) were to return to the fold sent the band’s global army of fans into a state of wide-eyed hysteria.

A new, six-man Maiden (Bruce, bassist Steve Harris, drummer Nicko McBrain and the newly named ‘Three Amigos’: guitarists Dave Murray, Janick Gers and the returning Smith) announced that they were to tour the US and Europe and then, most excitingly, make a brand-new studio album.

“From the moment we started the songwriting process, we saw the tour as being just a small blip on the way to making this record,” Bruce told Hammer’s Clay Marshall in 2000.

“[It was] something to cheer us up. The tour, in many ways, was the beginning of the campaign for this album. It started the ball rolling. It started winding people up. People realised, ‘If they can still do this live, can they still make a great record together?’ It posed a question, and [prompted] a great deal of discussion.”

The Ed Hunter tour kicked off in the US on July 11, 1999, continuing for 31 dates that noisily confirmed Iron Maiden were back to reclaim their throne. It ended on October 1 in Athens, at which point the band were in the thick of writing and recording the album that would either put them back at the top of the metal tree… or not. No pressure, then, for producer Kevin Shirley, who had mixed feelings about being offered the job of facilitating such an iconic band’s comeback.

“To be honest, when I got the call I was less enthusiastic than I should have been, because it appeared to me that they were a band that had maybe lost their way,” he recalls. “I was concerned because I’d had a look at where they’d been and the trajectory of the albums. It seemed like there was a pattern emerging and it didn’t look good. So I was apprehensive about it.”

He needn’t have worried, of course. If one thing has characterised Iron Maiden’s four-decade reign, it is a steely determination to never let the fans down. Combined with the kind of confidence that only comes when you know you’re the best, Maiden arrived at Guillaume Tell studios – a converted movie theatre in Paris, a brisk stroll away from the Champs-Elysées – with an abundance of musical ideas and a shared desire to make the best record possible. In a sense, it must have felt like business as usual for Steve Harris, Bruce and the others. But as far as their new producer was concerned, a new era demanded a fresh approach.

“Obviously I grew up with the old-school recording methods, where you’d record the drums first, then the bass and the guitars, and it took forever,” Kevin explains. “But I could see how there was this intangible energy you’d get, just from having musicians playing together. So I was dead keen on Maiden doing that. Steve, in particular, was very hesitant about it. He said he didn’t think it was gonna work, so I said, ‘If it doesn’t work then we’ll go back and do it as you’ve done previously, but let’s give it a try!’ Pretty much, as soon as they’d done one or two run-throughs, he said, ‘I never want to work another way again!’”

“There was always gonna be a different edge to a certain degree anyway, with the fact we have three lead guitarists [now],” Steve Harris noted in 2000. “That in itself, I would’ve thought wasn’t going to be an easy thing to handle, but Kevin handled it brilliantly. I do think he has given us an edge because it is just working with someone new and someone who is very positive, and he has a great vibe about him. The studio is not my favourite place to be. I would rather be onstage, so to be able to say I enjoyed it is important and to work with the right people is important.”

With their working methods refreshed, attention turned to the album itself. With countless ideas and half-finished songs flying around between Maiden’s numerous songwriters, finding enough material for a new album was never going to be difficult.

What was more potentially problematic was how the songwriting credits were going to be divided up, but any fears that the newly convened Maiden line-up would end up bickering were soon dispelled. Maybe due to simply maturing as people or because this was too good an opportunity to fuck up with ego battles, Iron Maiden were a firmly united front.

“People brought in different ideas and I guess Steve had the bulk of them,” Kevin notes. “He really is the keystone in that organisation – every song goes through Steve, and especially back then, with the reforming of that line-up. Over the last 20 years and the last five or six albums that we’ve done, it’s evolved a little since then, and it’s become a lot more collaborative. But they needed to have that one solid anchor and that was Steve.”

With their bass-playing general guiding the ship, Maiden duly conjured some of the strongest songs of their career. Listening back to Brave New World nearly 20 years on, you can hear the excitement in the air as Maiden bashed anthems and epics out in the Paris shadows. Armed with both short, sharp singalongs such as explosive opener The Wicker Man and the rampaging The Mercenary, plus towering, elaborate epics like The Nomad, the Maiden sound was receiving a subtle but significant upgrade.

“It was a band finding their feet in the studio again, finding that natural chemistry,” says Kevin. “Maiden is just different – you can’t change Maiden. I tried to introduce new elements, like the orchestra in Blood Brothers, to give things a very grand feel. But you can’t say, ‘Look, I think gallops are passé! Let’s go with something else…’ because that’s what Maiden is. They come in with a ready-built identity and you can’t fuck with it. It would be irresponsible to fuck with it, for one thing, and why would you want to?”

Preceded by a single, The Wicker Man, that emerged three weeks prior, Brave New World was released on May 29, 2000. As their world tour loomed, Maiden would have been delighted to note that the album received almost universal praise from the rock and metal press, with only a few bemused mainstream hacks questioning the validity of this return-to-glory. Most importantly, the fans absolutely fucking loved it, sending the album into the upper echelons of charts around the world and swiftly obliterating the sales figures for previous album Virtual XI in the process.

The band’s subsequent tour saw them return to the kind of venues and events they’d called home during their 80s heyday: Earl’s Court in London, Madison Square Gardens in New York and, in January 2001, a show at Rock In Rio in Brazil, in front of 250,000 people. As comebacks go, Brave New World was an absolute monster. And they’ve barely paused for breath since.

“As Bruce has pointed out on more than one occasion, those guys pay me a lot of money, so I always want them to be as successful as they can be,” states Kevin. “But success and chart placement aren’t important. For me, it’s been about seeing the evolution. They were a band that were really on their knees when we went into record Brave New World. It’s great to see them out there now, with the jets flying around and the crazy stage productions… it’s all just brilliant.”

“Maiden is the best heavy metal band in the world,” Bruce concluded, not unreasonably. “The musicianship within the band is so scarily good. People don’t even realise how good the players are in Maiden. That’s why it’s possible for us to do it. Also, in our hearts, none of us are satisfied with second-best. We’re not sad old fuckers getting back together to go and make a few bucks. If something’s worth doing, you’ve got to do it 100%.”