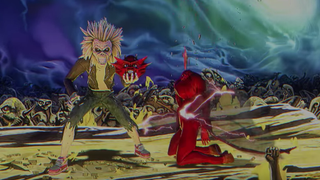 “I hate making videos at the best of times,” Bruce Dickinson confessed to French magazine Hard Force in 1988, “because it’s always a bit fake. You’re in a never-never world between acting and doing the real thing, and you feel a bit weird.”

It’s certainly true that Iron Maiden offered a refreshing alternative to the over-manicured gloss and big-budget pretensions of the MTV era, but nevertheless, the band’s ‘videography’ has flirted with greatness over the last 36 years. Here are 10 of their greatest clips…

There’s a cheerful, audacious integrity to this rough-and-ready home movie montage, the band reasoning that as MTV weren’t playing their videos anyway, why bust a nut and a budget? It was an advance pointer to No Prayer For The Dying’s more stripped-down, back-to-basics approach, and it gives a lot of fans a lot of pleasure to see Bruce serenading a field, Steve on a tractor tweaking a farmer’s ear, and most especially Dave Murray in wellies soloing in a stream.

Mercifully shortening the unwieldy tune from 11 minutes to a manageable four, Maiden presage the release of their CD-ROM game Ed Hunter with a feast of affordable 1998 CGI. Blaze gets to pull his face aside revealing Eddie underneath, Steve saunters into a virtual reality Ruskin Arms and the band play cards with Edward The Great himself. However, all the whizzy spaceships and animated fireworks are upstaged by Nicko’s poker face, and its subsequent collapse.

Maiden made an artform out of performance videos intercut with footage from old movies (see also Run To The Hills, Aces High, Man On The Edge etc), but this one takes a left turn with ballroom dancers and a hilarious joke shop monster head. Great movies too: Nosferatu, Godzilla, Crimson Ghost, and the Goat of Mendes scene from Hammer classic The Devil Rides Out. The appearance of Eddie at the video’s end had to be edited out when some fragile MTV viewers complained it was “too scary”.

Iron Maiden’s first video is always a solidly entertaining way to spend three minutes. Our first glimpse of Eddie on screen, and although the murderous ghoul loses some definition as a hand-drawn rubber mask, it’s arguably the scariest face he’s ever had. Although a first for Eddie, this video was the last thing guitarist Dennis Stratton did with Iron Maiden, and you can see why. The band look metal as Hell, all spunky energy and youthful joie de vivre, with some hippy groover in red leather trousers and a baggy poet shirt singing along stage left.

The imagery from this advance single was our first glimpse of the newly reunited six-piece line-up in action, and even Dickinson’s cut-off denim jacket got our pulses racing in April 2000. There are touches of The X Files and Twin Peaks about the video’s dark sci-fi narrative, and the big white weather balloons are surely yet another Maiden reference to The Prisoner. Eddie’s looking well, with his glowing red eyes and sickly grin; it’s just a shame we don’t get to see more of the burning wicker man.

There’s an elemental face-off between fire and water, with belching flames and burning demons, but it’s all about the weird acrobatic antics of the feathery bursting rainmakers. Shit gets torrential when Eddie looms down from the ceiling, shooting raindrops in an artful spiral spray pattern. With rapid cutting and high production values, it’s an unusual video for Maiden, directed by Howard Greenhalgh – who in 2003 was also busy helming vids for Placebo, Mel C and the Pet Shop Boys.

Maiden’s first narrative concept video is a complex conspiracy yarn about nuclear missile theft, instantly redolent of gritty 80s paranoid dramas like Edge Of Darkness and Threads, stuffed with Illuminati motifs (all-seeing eyes and goat heads all over the shop) and nifty pop-surrealism (the cabinet meeting of TVs tuned to static). The scene with soldiers holed up in a seedy bedsit was filmed in an unsalubrious tenement on the Isle Of Dogs; Bruce was surprised to find it was a house he used to live in.

Bruce initially told Hard Force magazine that “Alexei Sayle and Eric Idle” might be involved; the event it was the last major film appearance of Monty Python’s greatest loony Graham Chapman, who gives a sublime, measured performance. First we laugh at his snarling authoritarian schoolmaster, then we feel sorry for him when he’s frightened and confused in subterranean caverns. The ruins of Tintern Abbey in Monmouthshire make a glorious backdrop for spotting Eddie in the clouds, but when Chapman tumbles down a hole the action moves to Chislehurst Caves in Bromley, where Eddie gives birth in a fridge.

Written, directed and produced by “Iron Maiden imagineer” Llexi Leon, Speed Of Light’s breathtaking video is crammed with cheeky references to multiple aspects of Iron Maiden artwork as well as video game history: “It seemed a perfect fit, 40 years of metal explored alongside four decades of video games!” enthused Llexi to Metal Hammer last year. He had guidance from Steve, Bruce and Rod Smallwood, but the original idea was all his: “They loved the concept and asked if I could pull it off… I figured it was Iron Maiden, so I had to pull it off!”