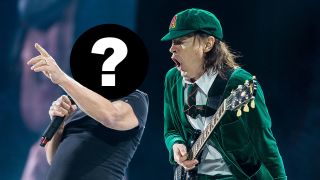 Today’s cruel news that AC/DC have been forced to postpone future touring plans as doctors have advised that frontman Brian Johnson risks permanent hearing loss threw up one intriguing prospect for disappointed fans, with the suggestion that ‘DC might return to the road with a guest vocalist.

Let’s face it, as the frontman of Airbourne, Joel O’Keefe has effectively been angling for this shot for over a decade. He knows the songs inside out, he could carry off both Bon and ‘Beano’ era vocals, he’s not much bigger than Angus and he’s got that balls-out working class Aussie swagger down pat. His youth might count against him, mind you.

A familiar face to AC/DC fans, having spent 18 months on the road supporting the Aussie vets on their Black Ice world tour, The Answer’s down-to-earth frontman has the voice, charm and presence to hold down a centre-stage spot in the world’s biggest arenas. By spooky coincidence, like Johnson, he also hails from a town called Newcastle, though in this case it’s Newcastle, County Down. Give the lad a shot, Angus!

In the 1980s, Switzerland’s Krokus thrived as a Stars In Their Eyes AC/DC, their uncanny impression of Bon Scott-era ‘DC hitting a peak with 1982’s splendidly derivative One Vice At A Time album. There’s no question that Maltese frontman Storace could carry off the vocals, but arguably his presence might make ‘DC their own tribute band.

Best known for his seasonal roar of “It’s Christmasssssss!’, had Walsall-born foghorn Holder not already been an internationally famous rock star in 1980, he might well have ended up in AC/DC as Bon Scott’s replacement. “AC/DC did offer me the job,” he revealed in 2000, “and I turned it down – so they went and got the guy from the band Geordie, Brian Johnson, who sounded exactly like me.” The Young brothers have always been proud men, so it’s unlikely that Angus will hold the door open for Holder a second time, but what a glorious noise they could make together.

Let’s be honest, this would be awesome. Sassy, super-cool, and possessing one of the finest voices in modern rock, Lzzy Hale would prove a massive shot in the arm for ‘DC, and there would be something delicious in seeing a female vocalist tackle lairy, Jack The Lad anthems such as Whole Lotta Rosie, Dirty Deeds… and Problem Child. Anyone who caught Hale singing You Shook Me All Night Long with Corey Taylor at Download 2012 will know she’s got the pipes and charisma to nail this role: this clip of Lzzy performing Shake A Leg in a Nashville club in January is further proof.

We’re going to go out on a limb here and suggest that Angus Young is probably not entirely au fait with the world of blackened death metal, but Behemoth’s frontman is a huge AC/DC fan, stating, in 2011, “Pretty much every day I need to put on my AC/DC CDs, because I’m fucking addicted to their music.” Perhaps Angus will cop an earful of the Polish frontman’s upcoming blues, country and folk solo album and realise Nergal might have more range and soul than he had imagined.

No, wait, come on… give the lady a chance, you fucks! The Canadian chanteuse’s deep affinity for down ‘n’ dirty rock ‘n’ roll was never better exemplified than on her unique interpretation of ‘DC classic You Shook Me All Night Long, accompanied by fellow diva Anastacia and some of the most cringe-worthy air guitar playing ever captured on camera. “Come on girlfriend!” indeed.

Another left-field option, admittedly, but American comedian Breur is not without form here, having previously tackled Brian Johnson’s vocal stylings to splendid effect in his stand-up show. Try that piss-taking in front of Angus, mind, and he might find a Gibson SG chopping at his ankles. No-one likes a smart arse, Jim.