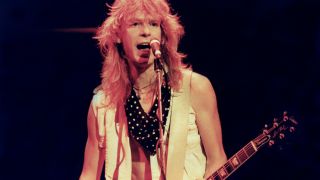 My earliest memory of Steve Clark – other than from the pages of Sounds or my second-pressing Getcha Rocks Off EP (I had to spell out B-l-u-d-g-e-o-n R-i-f-f-o-l-a to the mystified record shop lady so she could order it for me) – was of him and Joe Elliott feeding a jukebox in the bar beside the West Runton Pavilion in September 1979. He and Joe chose Thin Lizzy, mostly, so I got to keep my change AND have a good time.

The gig he played as a member of Def Leppard less than an hour later was even better. Steve was so much more exciting and (let’s be honest) dramatic than Pete Willis, the little guy playing guitar on the other side of the stage. Def Leppard did a couple of Lizzy songs – Rosalie and Emerald – as their first encores and I couldn’t have gone home any happier.

Fast forward 12-and-a-bit years to news of his death, and memories of that night came flooding back to me then as they do now, a couple of decades on. I wish he could still be here to make exciting and dramatic music for us all. But at least YouTube means we will never forget him…

Rock Brigade Okay, so the solo on this track is by Pete Willis, but it’s worth watching for the outfit that Steve is wearing – a fabulous rainbow and glitter bomber jacket-topped suit that looks like something Mick Ronson and David Bowie would have fought over. The second single from Def Leppard’s debut album On Through The Night failed to chart – though not for the lack of sartorial elegance by their stage-right guitarist.

Hello America Another early number and, as above, Steve looks so young… but he was only 19 when this was filmed. This clip has more great footage of some of the band’s earliest stage clobber and close-up shots of Steve’s solo and harmony singing alongside Joe Elliott on the second chorus. Dating from 1980, this was one of the first video clips made for the On Through The Night album, about 12 months after the release of the EP that set the ball rolling.

**Switch 625 ** Okay, so it’s not the greatest quality footage but Switch 625 HAS to be one of Steve’s finest hours (even if it only lasts just over three minutes). Filmed at a gig about 20 miles south of Paris, this is an old-school Leppard performance from the Pyromania tour – ie before they began playing in-the-round – but showing Steve looking oh-so-cool in that white jacket and pumps, blue neckerchief, cigarette hanging just-so from his bottom lip. Note, also, that on the one track that bears only his name as a writing credit he shares the lead work and the limelight with Willis’s much more impressive replacement, Phil Collen. That‘s not something many superstar guitarists would do happily.

Rock of Ages Don’t like your bands dressed in monk’s habits? Or their singer wielding over-size broadswords while lip-synching? Don’t blame Def Leppard – blame MTV! Somehow Steve manages to look dignified despite everything. This was the biggest hit on 1983’s Pyromania album – the one that broke them in the US.

Australian Interview You won’t learn a lot about Steve Clark from what he says here – in a brief sequence recorded for the Saturday morning music show The Factory – not least because he’s happy to let his good friend and fellow “Terror Twin” Phil Collen do most of the talking. But that’s precisely why I’ve included it here. Steve was mostly a quiet one, enjoying the trappings of success and fame but, generally, letting it all slide by until he could pick up a guitar again.

Animal The band’s first Top 10 hit here in the UK, it also reached 19 on the Billboard Hot 100 and began a sensational run of 10 consecutive US Top 40 singles. Taking a visual cue from lyric’s second line (“Such a lust for life, the circus comes to town”) the director places the band members in a big top scenario – and plants Steve behind bars and up to his ankles in straw recently vacated by who-knows-what kind of beast. Does he look daft? No way! He simply plays a hook that gets even the elephants rocking…

Pour Some Sugar On Me Eleven-and-a-half million “hits” for this clip can’t be wrong. This is Leppard at the height of their powers with Steve – and him having the time of his life. Calm and casual in the soundcheck footage, electrified and electrifying once the venue is full and the houselights are down.

White Lightning Essentially this is a fan’s mix tape of video clips showing Steve on and off stage. The scenes play to the backdrop of White Lightning, the song begun by he and Phil Collen in pre-production for what became Adrenalize, and completed by Def Leppard after Steve’s death. Sometimes he’s mugging for the camera, but usually just playing his arse off while ignoring it. The live clips remind you of his sheer joie de vivre as he struts around with a guitar around his neck. His choice was almost always anything by Gibson — as the clip unfolds you’ll see him wielding a number of Les Pauls – including custom three-pick-up models, Firebirds, and even a double-neck. No matter what the model he wears it slung low – as iconic as Jimmy Page circa 1975 – and throws it about, spinning himself around with the strap straining on his neck like a cage on a fairground chair-o-plane. That would be no big deal if he were wearing a Stratocaster – but Gibsons are different. Gibsons are heavy. He was suffering for his art.

Gods Of War A shaky hand-held camera phone, pointed at the diamond-vision screen from the 20th row. It shouldn’t work but it does. The occasion was day nine of Def Leppard’s 11-night Viva! Hysteria residency at the Hard Rock in Las Vegas – but this spine-tingling moment happened every night. Doing his best Mike Mansfield, Joe Elliott cues video and introduces the clip of his erstwhile band-mate playing a short solo that serves as the intro to Gods Of War. If you want it in hi-fi, slot the Viva! Hysteria DVD into your player and fast-forward, but whatever you do, don’t miss this. It’s brilliant that the band keep him alive in ways such as this. This band are a class act. As Joe Elliott says elsewhere on the DVD: “We miss him, we always will, but thank god he left behind something that was worthwhile.”