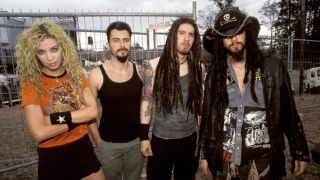 On the 11th of April 1995 Rob Zombie and the gnarly group of B-movie obsessed punks in the band he fronted, White Zombie, released their second album for Geffen Records, the kookily named Astro-Creep: Songs Of Love, Destruction And Other Synthetic Delusions Of The Electric Head. The fact that they were able to release one album on a major label was some achievement, but to be given the chance to follow up 1992’s La Sexorcisto: Devil Music Volume One would have been a shock to many onlookers. But, rather than the disaster predicted, Astro-Creep proved to be one of the defining albums of the ‘90s.

Formed ten years previously White Zombie were totally unlike anything the metal scene were peddling at the time, the band dealt in the same avant garde oddness that the likes of Butthole Surfers were gaining notoriety for but with a snot-nosed, punk appreciation for bubblegum Americana culture. After a slew of practically unlistenable early releases the band inked their major label deal just as grunge and alternative were starting to dominate the rock landscape, the resulting La Sexorcisto gained the band some attention on the coattails of this new movement – even though they really had nothing to do with it. The album was patchy and, apart from the success of shock hit Thunder Kiss ’65 that helped sell the majority of records, the band were seen as a novelty act that would soon vanish.

In late ’94 the band enlisted the help of Pantera and Soundgarden producer Terry Date to capture the larger than life, theme park aesthetic of their live shows and, with new drummer John Tempesta formerly of Exodus and Testament, set about creating their magnum opus. When they emerged they brought with them an album that was heavier on the industrial influences than their previous work, yet at the same time catchier and more instantaneous than they had ever been – but the most startling thing was just how good, how crisp, shiny and enormous, White Zombie now sounded. It was like experiencing them in Technicolor for the first time. The credit for that goes to Date in a major way, who employed the same tactics as he did on Pantera’s Vulgar Display Of Power album to make the band pop and crack in all the right places.

On release Astro-Creep… immediately captured the imagination of a public that were beginning to tire of plaid-shirted, identikit shoegazing rock and started to maraud its way up the Billboard charts, peaking at number six, and going on to shift over 2.5 million copies in the US alone. The likes of Electric Head Pt 2 and Super-Charger Heaven were driving, groove riffing bangers with Rob’s gruff yelps making them sound utterly unique. The album’s biggest hit, More Human Than Human, was nominated for two Grammys and won MTV’s Best Hard Rock Video later that year.

The band hit the road, playing the Donington Monsters Of Rock and Reading festivals in the UK on successive weekends. That they were able to appear on bills headlined by Metallica and Bjork respectively just goes to show the crossover appeal of Astro-Creep… and the mainstream impact that it had. A year later White Zombie were heading out around the arenas of America on a co-headlining jaunt with Pantera, a mouth-watering bill for any metalhead that made a mockery of the idea that heavy metal was dead. In fact, such was the rise of the band, White Zombie closed many of the nights and were seen as the highlight by many fans in comparison to an out of sorts Pantera, who suffered the trauma of frontman Philip Anselmo’s heroin overdose during the tour.

But not only did Astro-Creep: 2000 prove to be White Zombie’s high point, but also their swan song. All was quiet in the Zombie camp after an album of remixes, Supersexy Swingin’ Sounds, in 1996 and when Rob released his solo debut Hellbilly Deluxe two years later it was confirmed that his band were no more. Tempesta stayed with Zombie to drum on the album, bassist Sean Yseult joined surf rock band The Famous Monsters and guitarist J became a successful producer.

Over the years it’s obvious who has come out on top from the White Zombie split; Rob is now a household name (assuming your household compromises of people with a penchant for horror movies, comic books and cartoonish, electro-driven hard rock), and the clamour for a White Zombie reunion won’t ever gain too much momentum whilst you can see him playing the hits of Astro Creep: 2000 live with a load of cannons and a big fuck-off robot onstage with him.

But neither he, nor any of his former bandmates, can deny that they have failed musically to hit those heights ever again. Without this album there would be no arena tours or successful solo career. The fact that you’ll never go to a Zombie show and not hear More Human…, Grease Paint And Monkey Brains or Super-Charger Heaven is all the evidence needed for that.

So happy birthday to Astro-Creep: 2000. Still as weird, wild and wonderfully obtuse as it was all those years ago. Metal would definitely be a lot more boring a world without it.