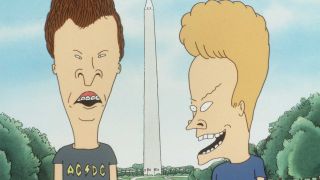 Beavis and Butt-Head creator Mike Judge has just revealed to Slash Film that he has "some ideas" for a new film featuring the foul-mouthed animated metalheads.

Following the finale Silicon Valley, Mike Judge's current creation, the writer will have more time on his hands to focus on new (or old) projects.

One particular series in question is the seminal MTV series, Beavis and Butt-Head – which was responsible for bringing numerous metal bands to mainstream attention in the 1990s – and Judge is definitely down for a return to Highland.

In 2014, Judge expressed an interest in reviving the duo and making more episodes of the series, which originally ran from 1993-7 and was briefly revived in 2011. He has also revealed that there might be potential for a live-action version of Penis and Butt-Munch (props if you get the reference).

Now Judge has revealed that Paramount, who released Beavis and Butt-Head Do America back in 1996, are interested in a follow up to the  troublesome twosome's sole feature film. The flick was soundtracked by the likes of White Zombie, Red Hot Chili Peppers, Ozzy Osbourne, Butthole Surfers and AC/DC.

“I’ve got some ideas. I think it would have to be something that makes it relevant today. I think I might’ve figured out a way to do that," Judge says. " “I would probably direct it."

Judge hasn't released any further details yet, but has previously mentioned bringing back the characters as old men, rather than as teenagers – and speculated that Beavis might even be homeless by now (so does that mean they wouldn't be sat on that iconic couch anymore? Where would they watch their music videos?

We're also wondering about cameos... What modern rockstars could make an appearance in this new incarnation? We're rooting for Corey Taylor and Tobias Forge.