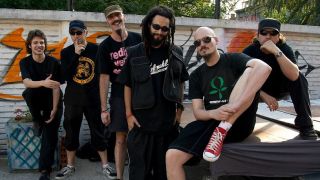 Nestled in a Serbian fortress packed with dance DJs and global hit-makers at Exit Festival, one unlikely stage has created its own world for the heavier end of the musical spectrum.

Aptly titled the Explosive Stage, this was where Louder got our first taste of the vibrant heavy music scene flourishing in Serbia. Guided by the folks at Serbian Hellbangers and Serbian Metal Portal, we were introduced to a list of bands that deserve to be on everyone's radar.

Over on the festival’s Fusion Stage, more heavy sounds – often blended with traditional sounds from Serbian history – put a new slant on what we understand as rock music.

Given the region’s turbulent recent history and the echoes of nationalism still apparent in some quarters, the visceral sounds of punk and metal seem completely at home in the region. This music has, sadly, undoubtedly been used to promote some messages of intolerance and hatred, but also vital messages of unity, tolerance and progressive politics.

Here, a starter list to the world of Serbian punk and metal.

This band immediately dispel stereotypes about Serbia. Taking to the Fusion Stage at Exit, Eyesdown celebrated 20 years of combining reggae swagger with crushing thrash metal riffs and hardcore punk aggression. One of the most active live bands in Serbia, they sing in English to present their socially-conscious ideas to a worldwide audience.

You don’t get invited to record on a Soulfly album by Max Cavalera unless you have some serious chops – and luckily, Eyesburn do.

“Total noise thrash” reads Atomski Rat’s online description. Born out of boredom in a small Serbian town, this fourpiece formed before they could play. The name translates as Atomic War, and their sound is mutually assured destruction for all involved. Brutal is their one and only speed, as they bash out wonderfully untechnical thrash riffs, hardcore rhythms and death metal vocals relentlessly. Their set at Exit destroyed everything – in the best way possible.

Hardcore punk echoes through so much of the heavy music in Serbia. The country, at the time part of Yugoslavia, was one of the first socialist countries to really “get” punk culture, lighting a fuse in the underground. Belgrade’s Bronze embody this tradition, harnessing the power of NYC hardcore and the echoes of their country’s brutal recent past to make a powerful punk statement.

How exactly to describe Lower Parts Of Human Sludge? Well, first up there's the incredible name – it may be tongue in cheek, but it 100% fits their music, which is clearly designed to be as horrible as possible. It’s great. They call it “brutal/slam/grind”. Live on the Explosive Stage at Exit, they delivered an aural assault that trod the line between pleasure and pain perfectly. Basically: submit to them.

Serbian hardcore isn’t just home to brutal, slamming riffs and untethered aggression. Taking to the stage at Exit, set in their hometown of Novi Sad, Roir unleashed a powerful set of post-hardcore which retains the hardcore blast beats and guttural vocals with progressive guitar time signatures and surging post-rock noise. Fans of Refused at their most inventive will find much to love in Roir.

Another gang of Novi Sad locals, named after the Riot tune, Thundersteel channel classic NWOBHM. Yes, they clearly love Iron Maiden. The interlocking riffs, the operatic vocals, the surging guitar solos – it’s all there. When they totally unleash, they descend into pure speed metal.

Perhaps the classic Serbian black metal band, since 1996 The Stone have risen to legend-status in the region’s metal scene and they're certainly one of the country's biggest selling acts. This is pure pagan black metal, revelling in nihilism and existentialism via technically complex but brutal metal.

Constant evolution is a key point in the history of Belgrade sonic adventurers Consecration, who emerged with definite doom metal leanings but have expanded their aural template over time to include elements of stoner rock, ambient, prog and post rock. Their music is a regularly surprising journey for fans of Isis, Opeth, Slowdive and Neurosis. Three of the five albums to date have been produced by Aaron Harris previously of Isis, expanding the sound further.

One of the most active metal bands in the region since 2003, Infest peddle pure classic death/thrash metal with all the crushing riffs and death imagery. You know what you’ll get with Infest.

There’s a reason that this groove metal lot was the first band from the former Yugoslav republic to play at Wacken Festival. They have also supported Soulfly. If you like groove-laden metal that never descends into being gimmicky, Downstroy are for you.

You can’t talk about Serbian metal without mentioning thrash legends Bombarder. Formed in 1986 they were one of the first bands to bring the speed and energy of thrash metal to the region. They have outlasted communism, survived the region’s conflicts (where guitarist Maho Šiljdedić lost his life) and emerged with a new line-up, still doing what they love and doing it well.

Losing the keyboards and symphonic elements of their previous incarnation Claymore, this new guise sees the band strip back to the raw elements of power metal, blending in elements of doom and folk to create something that has a distinct Serbian flavour.

Belgrade’s Kolac don’t deviate from what they love. Namely: classic, anti-religious underground black metal. If that’s your bag, you need this band.

There is something brutal running through Serbian punk and metal, and established death metal favourites are a fitting final act in this run-down.