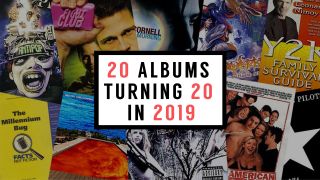 The 90s is well-known as a decade that took rock music and turned it on its head. Grunge's swell of popularity all but wiped out the turgid hair metal that'd been kicking around the charts at the end of the 80s, and ushered in a wave of chart-busting, innovative new sounds with it.

But by the end of the century, grunge had been rinsed for all it was worth by the mainstream and millennia paranoia was rife – in rock more than anywhere. As the 90s ticked over into the 2000s – just as had happened with the decade that preceded them – the sea changed and a new guard grabbed hold of hard rock. Enter: nu metal and the ever-divisive rise of rap-rock.

Somewhat alarmingly, those albums released in 1999 are all celebrating their 20th birthdays this year. Feel old yet? Yeah, us too. To celebrate, we look back on the albums that defined the 90s as they drew to a close.

A - A Versus Monkey Kong

As you can probably tell from looking at the title of this album, England’s A were never attempting to be the Britrock equivalent of Radiohead. In 1999, as now, this band were two things: a) almost impossible to research on the internet (finding them on Spotify's not much fun either), and b) not really given much credit for the great music they created. File under ‘Taken For Granted’.

Fronted by Casey Chaos (not his real name, we suspect), Amen delivered a solid album of lyrically thoughtful punk-metal. Hard, heavy, nasty and noisy, it’s a long way from a fun listen, but then they’re not trying to make you feel happy. This is an expression of anger that still has a steely appeal.

If 13 proved anything, it was that art is not a sprint, it’s a marathon. Damon Albarn’s band may have beaten Oasis to the No.1 spot in the singles chart, but while the Manchester group were selling all the albums Blur were staying ahead of the curve. This is a brilliant record – inventive, forward-looking and restlessly creative. And it features the fabulous Tender.

Were it not for the death of Diana, the demise of Soundgarden might well have been the single greatest cause for mourning in 1990s Britain. Euphoria Morning, Chris Cornell’s first noise outside of his old band, showed just what a talent he was. Unclassifiable and independent of spirit, it’s really a shame that Cornell didn’t do more on his own before throwing his lot in with Audioslave.

Previous to this record, Sweden’s Emperor were the kind of band reserved for people who never got laid or men who had bald spots and hair halfway down their back. Strange, then, that 20 years later IX Equilibrium is viewed by those in the know as being An Important Event. Which, distilled, means this: Without Emperor there would probably be no Opeth and dark metal would likely still be daft.

Even back in 1999, people were more concerned with what Feeder were not rather than what they were, or are. So they were said to be boring, derivative; they weren’t the Smashing Pumpkins (although here, God knows, they tried) and they didn’t leap about like the Red Hot Chili Peppers. All of which is harsh. Feeder have made some very good records, and this is one of them.

Foo Fighters - There Is Nothing Left To Lose

That title’s bollocks for a start. There’s always a court case with Courtney Love to lose, Dave.

There Is Nothing Left To Lose actually includes a song about Courtney Love (the disdainful, indignant Stacked Actors), but more than that it also features a bevy of fabulous tunes and hit singles. This is the album that signalled the fact that the Foo Fighters were here to stay.

Never mainstream in the truly commercial sense of the word, the Goo Goo Dolls still had an attentive army of fans. And those fans would have appreciated this album’s balance of weighty rockers and slower-tempo songs crafted with a more delicate touch. Nothing new or unexpected, just more of what this band did very well.

Kid Rock - Devil Without A Cause

How exciting was Kid Rock? He had a six pack for a stomach, a six pack in his stomach, a nice set of wheels, a girlfriend who was, by all measures, way out of his league, and 10 million fans. Trust us, this was a man who sounded like he was good in bed. Good ol’ boy rock’n’roll, blinding metal, hip-hop style and sexual swagger, this was the sound of the best millennium eve party in the world.

As good as Limp Bizkit’s debut album Three Dollar Bill Y’All was, it could be argued that it ploughed a single furrow throughout. And that was highlighted with the arrival of Significant Other, which while sticking to the same sonic-burn sound also poked around in other areas of music, and even used strings to soften the edges of some of their joyously hard rap-metal onslaughts.

And do you know what? For a time you could almost believe that Marilyn Manson was the last show on earth. That he was the last showman. The last true rock star before the apocalypse. Two years later his star might have faded and the shock factor may have gone, but in 1999, with this album, his shtick was thrillingly dark and dangerous stuff.

Want to hear something truly controversial? Okay, then, S&M – heavy metal band plays concert with San Francisco Philharmonic Orchestra – is the most impressive album Metallica have released so far. Why? Because it’s bold (Metallica… with an orchestra!), it’s courageous and it works. More than just Nothing Else Matters swimming in strings, this is exhilarating stuff. If you doubt that, then listen to Battery at the end of this double album. Fabulous stuff.

Ministry - Dark Side Of The Spoon

As far as pun album titles go, you’re going to have to travel some distance (a heroin trail, perhaps?) to beat Dark Side Of The Spoon. The fact that Ministry themselves were falling apart in a mess of white drugs makes this album even more voyeuristically appealing. And while it isn’t pretty, it is hardcore and it is oddly highly addictive

Never one to have a headache when he could have a full-scale existential meltdown, Trent Reznor returned in 1999 to pile on more pain and misery. Oh, he was a hurting. Nine Inch Nails’ first album for five years, The Fragile was half a decade’s unhappiness crammed into one dense double album.

How miserable? Try a weekend in Canvey Island during the December solstice, in the middle of a power cut, a gale, a nuclear winter and a Leonard Cohen concert. And you’re still not even close. Paradise Lost are the band who never smile, but then that’s part of their appeal.

Host is probably their most experimental album, on which they attach synths to their distorted guitar sounds, and do so more successfully than you might expect.

If it weren’t for Rush, the term ‘world’s premiere cult band’ would belong to Primus, lead by goofball Les Claypool. Odd, cool, original and commercially bankable (Primus went gold, occasionally platinum in the US), they not only ignored the rules, but probably weren't even aware there were any rules.

True to this, the fabulous Antipop features numerous producers, each working on individual tracks. They include Stewart Copeland, Tom Morello, Fred Durst and even Tom Waits, and the results are a diverse as you might expect.

Rage Against The Machine - The Battle Of Los Angeles

As political as Arthur Scargill and Tony Benn on audio tape, Rage Against The Machine were the soundtrack and the conscience of a decade that could hardly be described as ideological. Not cute, not post-modern, not ironic; here was a band who were able to sing about such unsexy topics as low paid and disenfranchised citizens of America’s foremost third-world city and make it sound both vital and sexy. An essential record, sadly still prescient today.

Featuring a title track that sums up California as perfectly as Beach Boy Brian Wilson himself could, Californication came along at a time when the Chili Peppers had their backs to the wall. Their appeal was on the wane and their best days were believed to be behind them. It figures, then, that they came back swinging. Californication was huge, and deservedly so.

In metal terms, the arrival of Slipknot was an earthquake. They had the appeal of early-day Metallica, the intensity of Slayer and the iconography of Iron Maiden. The faceless fury this nine-piece made enabled them to become famous. With this album they were dazzling.