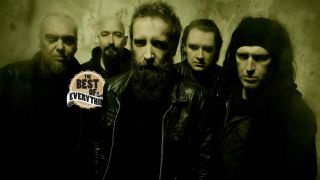 Halifax metal institution Paradise Lost have released 14 studio albums and four live albums since forming in 1988. Their most recent full-length, ‘The Plague Within’, was released in the summer.

We challenged guitarist Aaron Aedy to select the 11 essential tracks from their 25-year recording career.

“It’s so hard to choose my favourite songs,” says Aedy. “I have so many that it’s been hard to cut back to just a small selection. In the end, what matters to me are the ones I enjoy playing live. So, that’s the main reason for these choices. Not only do I have fun with them onstage – but so do the fans.”

TRUE BELIEF (Icon, 1993)
“I recall we shot the video for this in 1994 at the Rock Summer Festival in Latvia, and that was a memorable gig. To get there, though, we went on a horrendous plane trip. It was so bad, they gave you ropes to hang on to. And one of the guys from Asia was standing up all the way, while another had to sit on the toilet! The meal consisted of salt water and soggy biscuits. Thankfully, we had [*Red Dwarf *star] Craig Charles on the flight to lighten the mood. But apart from all of this, I love the song because it’s great to play live and always gets a very good reaction.”

ONE SECOND (One Second, 1997)
“When we did this album in 1997, we were experimenting with keyboards and electronic music. And for me, this is the best song U2 never wrote! If they’d done it, then One Second would have been a big hit, I’m sure of that. And it’s popular live, even when mixed in with all the heavy stuff we do.”

SAY JUST WORDS (One Second, 1997)
“This is the song we usually finish the encore with. It’s an uptempo track, with a catchy vocal hook and guitar riff. Everybody sings along to it, and you get caught up in the atmosphere. It’s one where I enthusiastically sing along with Nick Holmes!”

WORLD PRETENDING (Believe In Nothing, 2001)
“We’ve only done it live a couple of times. But I wish we could it do it more. I keep suggesting it, but I’m always outvoted. It has a great chorus, and a nice melody. When we do play it live it’s always a highlight.”

FOREVER FAILURE (Draconian Times, 1995)
“This has one of Greg Mackintosh’s best solos, and the way the song leads into that guitar break is a real favourite of mine. I remember when we once played the St. George’s Hall in Bradford. And that tour Mick Thornton, our lighting guy and a great friend, was teaching me how you set up the different lighting effects. Now, this venue had a glitter ball hanging from the ceiling, and Mick told me before the show that I should watch was gonna happen when Greg went into his solo during this song. What he did was have eight lights going up to the ball, and it created such an amazing effect. It just took the whole experience to another level.”

OVER THE MADNESS (Paradise Lost, 2005)
“This has one of my favourite solos by Greg. It’s a clean solo that’s so amazing, I lose it every time he plays it live. The song itself is fairly slow and heavy, which is unusual for us – ha! But that solo is incredible.”

THE ENEMY (In Requiem, 2007)
“This is a good mid-to-uptempo headbanger. I have great memories of shooting the video for this in the Crimea over three days. We had 36 extras, all of whom were either Ukrainian or Russian and had been in the military. They were so concerned about being paid that they insisted on stopping every few hours and getting the cash. So, Nick had to open a Ukrainian bank account, and go there regularly to draw out the cash to pay these guys. And he wasn’t just in costume, but covered in mud from the video set. You can imagine what the bank thought of him. We had to be shot in the video – and were taught the proper way to fall down in mud once you’re shot. The guy who showed us the right way to do it also worked on the Sharpe TV series. So he probably instructed Sean Bean as well as us!”

FAITH DIVIDES US – DEATH UNITES US (Faith Divides Us – Death Unites Us, 2009)
“This is perhaps the song I’d hate most to be dropped from our live set. I get right into the zone when we play this. It has a beautiful acoustic section, and also some powerful moments, plus a really angry chorus.”

TRAGIC IDOL (Tragic Idol, 2012)
“It’s got a great, heavy, chunky riff in there. And also a nice acoustic part that complements it so well. And I have to admit, it’s another where I sing along enthusiastically with Nick on the chorus!”

BENEATH BROKEN EARTH (The Plague Within, 2015)
“It was one of the last songs written for the current album. But when I heard it, I thought ‘Blimey! It’s amazing’. This is one of the best slow, doomy songs we’ve ever done. And Nick growls through it so brilliantly.”

GONE (Mouth single, 2001)
“I have to give this an honourable mention. It was on the b-side of our single Mouth, and was never on an album. It’s a shame, because I really like this one. I want to include it, because this is a song that’s usually overlooked, and deserves more attention.”

Paradise Lost’s new album The Plague Within is out now through Century Media. The band are on tour now. See their official website for details.