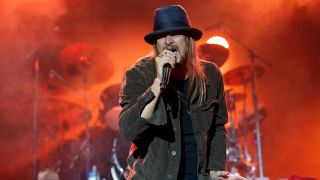 Self-professed ‘American Bad-Ass’ Bob ‘Kid Rock’ Ritchie returns with his tenth studio album, First Kiss, next month. As a reminder of what we’ve been missing, here’s a selection of the Kid’s most memorable words of wisdom.

“As a child I was hell. I didn’t follow the rules. I never set out to hurt people, but if someone said ‘Fuck you’ I’d smack them upside the head. I like to think I’ve grown out of that a little bit.” (2014)

“I could have been good at school, I just didn’t see any use for it. If people want to study hard to be a doctor or a lawyer that’s great. I had to work at other things: fucking bitches, counting money, how to make money…” (2002)

“My past is a bit checkered. It’s not that I’m Mr. Goody-Two-Shoes now, but I’ve got my priorities in order. I was such an idiot… I think I did every drug known to mankind, smoked crack, boozed, dropped acid, you name it. I’m glad that I got out of it, a lot of my friends from that time didn’t.” (1999)

“I do try to be the nice guy. I don’t say ‘I love you’ so I can fuck you. I don’t fuck underage girls, and I don’t fuck married women. And I won’t steal somebody’s girlfriend. I don’t want to be that motherfucker.” (1999)

“The rule I really try to live by is: No Assholes. I try not to associate with or be around assholes. It’s really worked out pretty well.” (2007)

“If I have a party on tour I’m not grabbing for the Radiohead CD to get the party started! Anybody who is grabbing for it isn’t gonna get laid unless you’re looking for a sympathy fuck.” (2002)

“If you ever wanted to rob a trailer park, do it during a Kid Rock concert. When I hit town, the trailer parks empty out and everyone comes to the show.” (2008)

“The problem I got is when people are like, ‘Fuck Kid Rock, he’s a piece of shit, white-trash whatever.’ I’m like, ‘You wouldn’t say that to me in a fucking bar. You’ll get your fucking wig peeled back. So don’t sit behind your computer and type it.’” (2011)

“I’ve got nothing to hide. If you lie and get caught you look dumb. If you catch an actor with a hooker, it’s front page news, but if I’m caught smoking crack with a hooker, I’m some sort of hero. It’s like, ‘Yeah! Alright, Kid Rock!’” (1999)

“I see people driving around in their Rolls Royce with their windows tinted and they’re embarrassed. I’m not. I have made a ton of money. But you know what? I’ve never taken an unhonest dollar from the working man.” (2014)

“Somebody said to me this year on my birthday, ‘Happy Birthday. How are you going to celebrate?’ And I said, ‘You know what? Every day is my birthday’…” (2006)

“I don’t know how to ‘FaceTweet.’ I’m not a fan of Coldplay. I’m not cool enough to play Coachella. I don’t give a crap about what’s rock ‘n’ roll. I just want to have some good times and drink some cheap wine.” (2014)