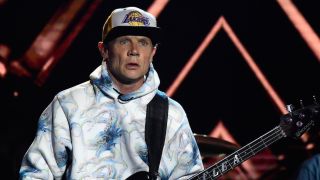 According to a big old survey done by people wielding clipboards in your local high street, millions of people in Britain often worry that they’ve left electrical appliances switched on when they’ve left the house.

We blame the pace of modern life. We’re always in a rush to do this, that or the other, and electrical safety precautions take a back seat. It’s only when we’re in the middle of something else, often miles from home, that we remember the oven light and make that face. We could be having the time of our lives, then the all-consuming 1,000-yard stare takes over. There’s no shaking it off. It will ruin your night out.

Krist Novoselic, Nirvana: rushed out of the house after warming up last night’s leftover pizza

Troy Sanders, Mastodon: a bit too eager to have that grilled cheese sandwich

David Ellefson, Megadeth: distracted by a text message while showing his bandmates his new convection oven

Chris Wolstenholme, Muse: the face of a man who’s returning to burnt leftovers

Les Claypool, Primus: “This next song is from Sailing The Seas Of Cheese… cheese… melty… oven… fuck’s sake.”

Ben Shepherd, Soundgarden: he may have remembered to bring six big amps and an NFL sign to this outdoor show. But did he turn off his oven? Not so sure.

Twiggy Ramirez, Marilyn Manson: you can tell he’s left the grill on full blast, even though he’s wearing a… whatever the fuck that is

Cliff Williams, AC/DC: may have to text his neighbour to ask them to check the kitchen when Angus starts taking his school uniform off

Mike Dirnt, Green Day: probably going to have to buy a new house

Flea, Red Hot Chili Peppers: nothing worse than imagining your house ablaze while you’re mid-jump in front of thousands of people

* We can’t stress that enough. In fact, all the musicians pictured here have probably turned their oven off before leaving the house. So there you go.