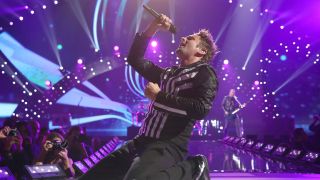 This is Six Pack, our mini compendium of the informative or the quirkier aspects of rock music. This week, we poke around the mind of Muse man Matt Bellamy…

ON THE GREATEST RIFF OF ALL TIME “There are almost too many from Rage Against The Machine to choose from but the ending of Freedom is so great. That building guitar line before it goes double time while Zack De La Rocha screams ‘Freedom!’ over the top? It makes me want to go mental every time I hear it. I was in the mosh pit at Reading Festival in the mid-‘90s when they played that and I remember thinking, ‘That’s it, that’s what I want to do for the rest of my life.’”

ON… BAD BEHAVIOUR
“We once had a well earned reputation for pushing things to the extreme offstage. We have clean fun now. We couldn’t carry on like we were, we’d be burned out by now. So mostly, we have clean fun on tour now. Towards the end of 2006, we were all getting a bit tetchy, but that was only because we had been playing so many shows. It was winter time then and for about two weeks I didn’t see daylight. I’d get up, soundcheck in the venue and, by the time that was done, it’d be dark again. So we’d play and then get to bed late, so I’d have to sleep and it would be dark again. That got very depressing.”

ON… PLAYING WEMBLEY
“The first time we played Wembley Stadium, I was very nervous. We actually got stuck in the lift that was supposed to be lifting us up into the crowd. It very Spinal Tap. I was thinking, ‘Oh shit, this is terrible. It’s all going to go wrong’. I could hear the crowd and I began to panic. I went blank. I blanked the music, the lyrics and I blanked what my job was. All I had going through my head was: ‘How did I get here? How did this happen?’ I couldn’t understand what had got me in the sort of position where I suddenly had to entertain 60,000 people. When I was a kid, doing something like playing Wembley was something I dreamed of. When I was actually faced with it, I thought, ‘Shit, I don’t know if I can do it’.”

ON… REVOLUTION
“I have a natural instinct to talk about things like revolution in our songs. For the last decade of rock music, there has been an unusual tendency for bands to shy away from talking about certain things when they get into a certain position. I think, well yes, it might be risky, but they’re things in which I’m interested so I should get them into the music. Having said that, not everything Muse does will be about that. We’re never going to be Rage Against The Machine because we’re never going to be as advanced as they are when it comes to getting involved in certain issues. But there are definitely bands who get to a certain level and they spurn the chance to talk about them. I just think, ‘Why not?’”

ON… SUBVERTING THE MAINSTREAM
“There’s a lot of word of mouth with this band, a lot of people are spreading our music around the internet, a lot of it is given away and people don’t necessarily realise that. The mainstream media tends to focus on who is selling records, and they miss the fact that there’s loads happening that can’t be monitored but can put a band in Wembley Stadium.”

ON… BEING UNKNOWN AND SUPERSTARS AT THE SAME TIME
“I think Muse are in an unusual position. Certainly you could say that we’re the most unknown band to play Wembley Stadium. When you look at the names who have played there, then it’s a weird group for us to be in. I don’t think we fit there. But we’re lucky. We get the experience of playing massive concerts without the intrusion or character invasion that can come with it. We’ve managed to stay very much ourselves and remain down to earth because we haven’t allowed the people around us to affect the way we perceive ourselves.”

Don’t forget to go and vote in our poll of the best riffs of all time. Results will be announced on World Guitar Day, 6th October 2017.