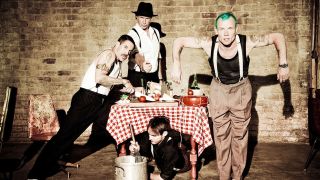 Sometimes when you’re interviewing a musician, it can be hard to get a handle on how well it’s going.

“You’re kind of pissing me off right now!”

Occasionally, the band’s publicist will politely whisper that one or two of the questions didn’t go down that well.

Or you’ll notice years later that you never interviewed a particular person again and you’ll come to a slow, dawning realisation.

Every once in a while, though, Flea from the Red Hot Chili Peppers will hurl a bottle at your head, which will shatter on the wall behind you, and you’ll receive a more immediate kind of feedback.

“Cocksucker! I’m so sick of you motherfuckers, man. Every fucking time. You can suck my fucking dick, limey bitch.”

It was a little over 10 years ago that I was sat in Claridge’s, the luxury London hotel that is the Chili Peppers preferred interview spot. The band had just brought out their sprawling double album, Stadium Arcadium and, before a question had been uttered, I could sense there was an atmosphere.

The Red Hot Chili Peppers have always been a turbulent band; those tensions came to a head during the making of their 2002 album By The Way. Guitarist John Frusciante had seemingly dominated the the recording process and it appeared to put Flea’s nose out of joint. The bassist also held a grudge against Anthony Kiedis, because in his book Scar Tissue, the singer admitted to sleeping with Flea’s sister.

The sense of friction was palpable, so it would be a dereliction of duty not to ask Flea what the problem was.

We started by talking about By The Way. Flea said he’d not listened back to the album as it represented a tough time between himself and Frusciante. The bassist remarked that, despite a marked improvement in their relationship by the time they’d made the follow-up album Stadium Arcadium, he was “dead set on quitting” the band around 2004. Well, you can’t just ignore that. So the conversation took a negative tack once more.

He broke off. Then snapped.

“If you really want to fucking get into, I think it’s fucking silly and you’re kind of pissing me off right now. This is fucking bullshit and you fucking English people always do this fucking bullshit. Shut the fuck up! Fuck you!”

And then he threw a bottle at my head, kicked a very heavy wood and glass coffee table with his bare feet, and stormed out of the room. Thank god I didn’t ask him about Kiedis fucking his sister.

For the next 10 minutes or so, Flea could be heard storming up and down the corridors of Claridge’s yelling: “Fuck him. You can suck my fucking dick, limey bitch!”

It remains the only time I’ve been called a limey bitch.

His publicist came in and asked what had happened, horrified, but was then called back out by Flea. “Limey bitch!” he shouted at her, before jabbing his thumb in my direction and apologising to her: “Not you, that limey bitch in there.”

At one point, one of the very rich and very traditional guests of the hotel walked past. He looked and dressed like the Major from Fawlty Towers. At the sight of a very angry bassist shouting “limey bitch!” his monocle popped out.

And then, suddenly, Flea stopped. He came back into the room and calmly said: “If I was bitter with John, I would tell you.”

He explained why he was angry: “Sometimes this whole press situation makes me very distrustful of everyone, you know. It makes me very distrustful of people’s sincerity and their honesty with what they say. I feel like that I’m always completely honest with everyone about everything and then it gets turned around and misquoted. It happens in England, it’s so weird, I don’t know why.”

I told him that perhaps it was because the English press did not give bands as easy a ride as the American press sometimes did. “But if you feel the negative nastiness, you’re going to write it no matter what I say,” he pointed out.

Well, I said, what I am going to write is that you throw a bottle at my head.

It was a first for both of us, in fact. No one had ever thrown a bottle at my head during an interview either. “Maybe we should just shake hands on that,” I suggested.

“Alright!” he said, and we did. “If you’re going to write something mean about me, that’s fine.”

We talked about jazz for a few minutes, a little about funk. Meanwhile, the elephant in the room failed to hide. He cracked first.

“I’m sorry, did I scare you when I got mad? Did you think I was going to smack you or something?” he said.

Were you, I asked.

Well, there was no reason to get scared then.

I think you’re probably tougher than me, I added.

A few moments later, the interview was over and both of us got into a lift to travel a few floors up to the photo shoot. He put his arm round my shoulder, apologised again and hugged me tightly. I hugged him back. It seemed like the right thing to do.

A few hours later, he took to his blog – Fleamail – and wrote about me. This is edited, but it read something like this:

“Today I was talking to this man and he kept asking me about … tension between John and I on the last record. And he would not stop talking about it.

“I told him that I was getting angry about it, that it was accomplishing nothing and that is strange because I never get angry in interviews.

“I have had much more ridiculous journalists in my life, he actually seemed like a nice guy. I don’t know if it’s because I am jet lagged … but anyways, I started getting angry and next thing I know I started yelling and seeing red and I threw my bottle against the wall and hurled insults at him and stormed out of the room.

“The little Flea threw a tanty.

“Oh well. I just hope I didn’t make the journalist feel bad. Whatever he writes about me, I don’t like to make people feel bad. Even if they piss me off, it just doesn’t help anything.”

It is nice to know that I am not the most ridiculous journalist in the world. And that, even when I’m pissing someone off, I seem like a nice guy. But 10 years later, I’m still dining out on this story so, no Flea, you didn’t make me feel bad at all. I kind of enjoyed it. And I’m sorry too. I’m sorry for concentrating too much on the negatives.

A postscript: five years later, I was in another room in Claridge’s with Kiedis and Smith again, this time to talk up 2011’s I’m With You. Flea was in Milan doing press duties there. At the end of the interview with his singer and drummer, I sheepishly admitted who I was. The pair of them erupted into long and loud laughter, water very much under the bridge.

“You took it very well, you were very understanding,” said Kiedis. “I think he had a bad moment.”

I told them I was simply glad they hadn’t thrown another bottle at me.

Red Hot Chili Peppers’ new album The Getaway will be released on June 17 through Warner Brothers.