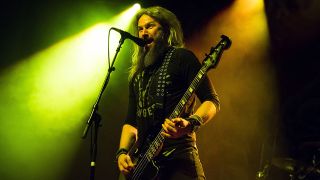 As one quarter of alt-metal heroes Mastodon, bassist Troy Sanders has accrued some pretty serious musical credentials over the years. Whether it’s joining Iron Maiden as tour buddies, writing songs about White Walkers or headlining numerous summer festival stages, there’s nary a corner of the metal world that Sanders and his gang haven’t conquered. But where did his path to global metal domination begin? He discusses Poison’s mysterious allure, Aerosmith’s “game-changing” qualities and the importance of DIY ethics…

What was the first single you ever bought?

“This is pretty good – it was Look What The Cat Dragged In by Poison. The reason I bought it is because I was at a department store with my parents, and I was allowed to pick out one record, and they had 45s – singles. I had never heard of this band, but I thought the four ladies on the cover were very, very hot. So that’s what I picked out, and shortly thereafter I realised it was men, and I had been completely fooled. But regardless, [Poison are] undeniably one of the best and most famous glam-rock hair bands of all time. But, it was originally purchased because I thought they were pretty hot.”

“Men At Work, the Business As Usual album. They had the number one top 40 hit at the time, and I was once again allowed to go into the record store and purchase one item. I was very familiar with Men At Work and wanted that record, and that was my first full-length. To this very day I’m still a huge Men At Work fan, and I’ve been following their singer Colin Hay. [He] has over ten records out on his own these days, and he’s still touring heavily. I’ve seen him three times recently, [he’s] just super inspiring and grounded. I’m a giant Colin Hay and Men At Work fan, and that record is framed in my house.”

What was the first gig you ever went to?

“Aerosmith in Atlanta, Georgia, where I grew up. It was totally awesome; it was rock’n’roll. It was my first time in a large building with maybe 12,000 people all there because they all love rock’n’roll – it was the first giant party I ever went to. There’s people of age that were drinking, there’s a lot of funny-smelling smoke around, every dude had long hair, every girl had on skimpy clothing; it was mind-blowing. Aerosmith, what can you say? They were a game-changer for me. We’ve never shared a bill with Aerosmith, but maybe this coming year. I know that they’re doing some more shows they’ve announced – I would love to cross paths with them. Their bass player, Tom Hamilton, has come to two of our shows in Boston – which is where Aerosmith are from, and he still lives there. He’s a super sweet gentleman and it was fantastic to have him in the Mastodon dressing room just chit-chatting. He’s a very sweet dude.”

What was the first gig you ever played?

“I was with my first band, called Scavenger, and we played at the local Town Cinema. It was an old theatre that was converted to a small venue. That was my first gig, in Atlanta, Georgia. We played all originals, but we covered a David Bowie song that night, and that was my first exposure into the world of David Bowie, so looking back that was pretty amazing. We played rock’n’roll like Van Halen, Kiss – straight up, ‘cause we were writing originals and we’re all 16 years old. All of us were in our very first band trying to do originals, and I remember the guitar players were working on riffs and piecing stuff together, and it was the first time we ever were writing words and lyrics. It was great. But my first gig was in front of maybe 50 people, with Scavenger.”

“It was great. It was eye-opening. The gate-head opened and we were off to the races. We were intent on taking our music around the country to expose it to anyone who was willing to look or listen. All four of us were all committed and determined to do whatever it took to gain anything; we weren’t going to sit at home and just wait for a good tour to happen, or wait for a potential label to be interested. We knew we had to go out there and make it happen ourselves. So right away we knew we had a chemistry that was off to a great start, and we went through three vans and lost thousands and thousands of dollars before we ever could share our very first hotel room with all four of us. It laid the groundwork for the intense work ethic that we continued over many, many years. We would play anywhere, and we would be happy to do it. It was all hours and hours on phone calls, just begging, because we were nobody. We were starting from scratch and we were all willing to work for anything good that would come our way.”