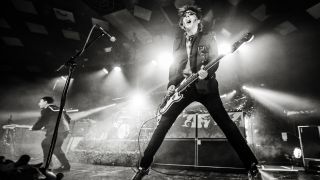 Most people imagine that you can barely move on the streets of Wales for male voice choirs or Tom Jones and Katherine Jenkins singing at you. Or that every hill and dale echoes with the songs of Max Boyce (look him up, you’ve got Google). But if only that were true. However, the Welsh do have a strong tradition of song and it’s not just Aled Jones singing about snowmen in a high register.

Here are the 10 songs that still resound around the valleys…

A band who briefly dazzled America’s West Coast with their jaw-dropping mix of psychedelia, progressive and pub rock. Originally a more mainstream pop band (you try playing extended psych jams in a working men’s club in Merthyr Tydfil and see how far it gets you), Man changed gears and the trajectory of their careers with a name change from The Bystanders and the introduction of Deke Leonard. By the time they’d arrived at 1974’s Rhinos, Winos and Lunatics – produced by Roy Thomas Baker – they’d morphed into a beautiful mesh of Steely Dan, America and a woozy sounding Doors. Kerosene (or lamp oil as it was known in the Rhondda, though Man had gone almost completely Hollywood by then) is a slow burner (sorry) with deft guitar play and some lovely piano flourishes, you can see why California was once so enamoured with them.

Another Welsh band with their eyes on the American market, with their twin guitar harmonies and layered vocals, Sassafras drew comparisons with early Fleetwood Mac and even the Eagles, though that could quite have easily been Wishbone Ash or even Humble Pie. Briefly the hardest working band in showbiz – 300 plus gigs a year was the norm – they’d still suffer from not being Man. Still, there’s no denying the strength of their landmark debut album, 1973’s Expecting Company (reissued in 2014 via Esoteric). Not least in the vibrant Beans And Things, which might sound like it was titled as an afterthought, but listen to the Santana-like breakdown and marvel at their sheer ambition. It was all a long way from Llandaff.

Dub War are now consigned to history as the band who sewed the seeds for the formation of Skindred, but in the albums Pain and Wrong Side Of Beautiful (from which Million Dollar Love is taken) they encompassed everything from Bad Brains to Therapy? Both raucous and sublime, they could be as venomous as the Manics, or as aggrieved as Rage Against The Machine, and in lead singer Benji Webbe, they had a fully-fledged frontman who could work an audience in both the clubs and festivals with uncommon ease.

The Bridgend band that went from playing second on the bill to Guns N’ Roses at Download to calling it quits earlier this year might never have got over the release of their landmark debut album, 2003’s Casually Dressed & Deep In Conversation. Post-harcore? Emo? It didn’t matter the tags, the band and their music always seemed bigger than that. Their album covers had a Pink Floydian bent and their aspirations were sky high, it’s a shame that their drive couldn’t take them all the way to that imagined horizon. Instead, then, sate yourself with the unremitting thunder that is Monsters with drums that sound like your front door being kicked in and danger lurking just around the next corner.

The sadly short lived Lone Star (not the pretty, pop country stars from the US), came flying out on Cardiff like a police car chasing through the city’s St. Mary Street on a Saturday night. Their self-titled debut was promising enough, but with their second album, Firing On All Six, Lone Star truly shone. With Paul Tonka Chapman (who would later team up with UFO) on guitar and John Sloman (who’d end up singing with Uriah Heep) and a musical canvas that was as much melodic rock as it was prog, Long Star’s sophomore release was best typified by the seven minute plus, The Bells Of Berlin. With hints of Rush’s Xanadu (also created in South Wales, coincidentally), if Xanadu had been produced by Styx’s Tommy Shaw, …Berlin was a grandstanding epic with washes of keyboard and furious drum patterns throughout. And there’s absolutely no truth in the rumour that the demo version was titled The Bells Of Bargoed, which is a shame.

There’s clearly something in the water in South Wales, some sort of heavy metal judging by the fact that bands like Funeral For A Friend and Bullet For My Valentine both originated there (and chose names that you’d be hard pushed to fit on a CD case). Not unlike Funeral…, BFMV started hard and fast with 2005’s acclaimed debut The Poison and have had to work hard to maintain that initial promise and momentum ever since. That said, they made a pretty good fist of taking on America with the Scream Aim Fire album three years later, not least in the Hearts Burst Into Fire single with its cod Bon-Jovi-on-tour shtick video. Shameless, but try not waving your pint glass around the next time it comes on in the pub.

The King of Wales in all but name, Tom Jones’ career might have gone from earthy soul to Las Vegas schmaltz (though I did once see him play a residency at the MGM Grand there and he and his ten-piece band were mesmerising) to latter-day, hardened blues rock, there’s no denying the timbre and range of that voice. By the time of the She’s A Lady album (from which this comes), Tom really was the housewife’s favourite, on about three different levels, and this reworking of Ashton, Gardner and Dyke’s only hit would soon make everyone forget it was ever their song. And look at those moves, no wonder he numbered Elvis among his mates.

Though Catatonia’s singer Cerys Matthews once described the Manic Street Preachers as ‘so Welsh’, it was her band’s breakthrough album that resonated with a Welsh inflection even in songs like Mulder and Scully and I Am The Mob, Matthews’ husky Taff timbre rang true. Not least in the album’s title track, sung solely in Welsh until the chorus broke open to declare, ‘Every day when I wake up/I thank the Lord I’m Welsh’, you can only imagine the scenes when they inevitably ended their tours in Wales and started in on this. Tidy.

Along with Budgie, probably the defining Welsh band of their era. Later, they’d eclipse their own lipstick-smeared, sabre-rattling roots and become, much against their will and quite wrongly, tagged with Britpop’s sneery bunch, but their true totems were bands like Guns N’ Roses and Wire. Though A Design For Life is the unofficial Welsh anthem (it’s hard to top Hen Wlad Fy Nhadau, the most stirring national anthem in the world, fact), You Love Us is the Manics at their snotty-nosed best. Originally released as a single on the Heavenly label and then resurrected for the Generation Terrorists album, it still sounds like a middle finger raised to the world, you can almost see them throw their guitars into their backline as they stomp off stage. Glorious.

There’s an argument for Budgie to have this top 10 all to themselves, it’s not to understate things to say that the trio changed the face of rock in Wales, well, certainly among me and my friends. Though most people will argue for Never Turn Your Back On A Friend (featuring Breadfan as its opening track) as the band’s defining album, it was their next album, 1974’s In For The Kill that saw the band take (ahem) flight. Not least in the rolling and punchy title track, which managed to conjure up Sabbath, Zeppelin and Rory Gallagher. Never mind that Metallica covered Breadfan, Van Halen used to play In For The Kill at their club shows. Imagine that.

The 10 best metal bands from Wales

What happened when The Manic Street Preachers met Rush