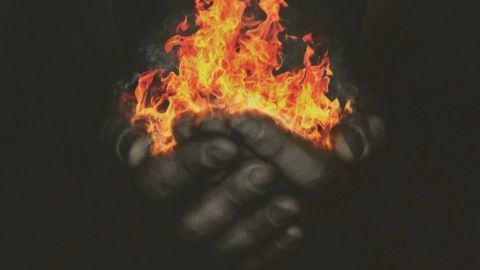 It's. Just. Music. How many times have you heard these three little words and groaned, at someone’s inability to appreciate that music is so much more than just the noises coming from their Spotify playlist? If ever you find yourself in that situation again, struggling to convince someone that the music you love has a bigger impact, a greater depth than they can fully appreciate and comprehend, then feel free to point them in the direction of Don Argott’s As The Palaces Burn. Because here is a snapshot of music’s ability to inspire devotion, change, personal growth, cultural misunderstanding, demonisation and redemption and is quite unlike any documentary the metal world has ever been privy to.

When Lamb Of God guitarist Mark Morton recently told Hammer that his band had a history of “bearing our asses” on previous DVDs it wasn’t just a an unusual turn of phrase, it was, in this case, selling themselves desperately short. These aren’t bums being flashed, this is Lamb Of God’s chest ripped open and beating heart put on display for the world to see.

The movie begins in the band’s rehearsal studio on the start of the Resolution touring cycle, bursting through a quick potted history of how they went from club-dwelling metal band to globe-straddling, Billboard chart-topping megastars. So far, so familiar.

It’s then that the movie begins to switch focus from band to fan as we see the impact Lamb Of God have made all over the globe. The Colombian taxi driver who was so moved by their songs that he gave up gang life and drug pushing, instead preferring to drum along on his steering wheel to the point of wearing it out, the Indian girl who eschews social convention in her homeland to become one of only two female metal singers in India and is visibly shaking with emotion on her way to the band’s gig. Different backgrounds to you they may have but the passion they feel for music is as relatable as the guy stood next to you at any gig.

It’s this first half that makes the second half of the movie, as the events of Prague unfold, even more shocking. Nothing is left to the imagination and Lamb Of God deserve great credit for continuing on with the film with such a weight under around their necks.

So many moments in the last half an hour will raise every hair on your body: seeing Willie Adler in floods of tears as Randy returns on bail; Randy’s face backstage as Lamb Of God prepare to walk out for his first gig back at Knotfest to an ever-swelling chant of his name; watching the band auction off their past to pay for the expensive legal bills and, most of all, the footage of the trial. The close-up of Randy listening to the uncle of Daniel Nosek testify; seeing the pain on his face as he hears of the trauma how the death has affected their family; the fear as his lawyers tell him he will probably serve some prison time; the grace in which he accepts his exoneration.

As The Palaces Burn is a courageous, uplifting important and life-affirming look at one of the most troubled periods in the history of any band. It’s always more than just music and this is more than just a film.