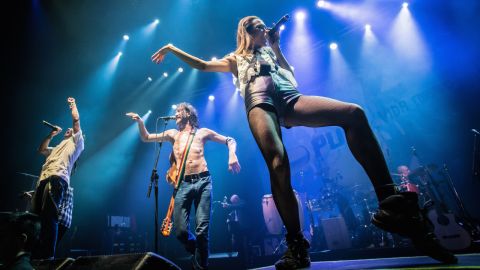 When they formed the template for modern day punk rock back in 1976, the Ramones could never have envisaged how far reaching, vibrant and varied a style of music it would continue to be almost 40 years on. This weekend’s visitors to the Team Rock bunker are the perfect examples of just how broad and eclectic the genre continues to be: Mariachi El Bronx and Gogol Bordello. Here’s our account of the night punk rock came to town…

The former is the alter ego of Los Angeles-based hardcore punk rock band The Bronx and sees its members, with the help of some virtuoso, multi-instrumentalist friends, reinterpret the template of traditional Mexican mariachi music. The latter consists of Ukranian, Russian, Ecuadorian, Scottish-Chinese and various other nationalities of musicians from the Lower East Side of Manhattan, and they’ve been touring the world playing their unique hybrid of gypsy punk, Latin rock, folk and reggae for over a decade.

Before their joint gig on Saturday in London, both bands paid our radio studios a visit to record some live session tracks for the Team Rock Radio Punk Show and we were treated to a taster of what was in store for the 3,300 people heading to the sold out show at Camden’s picturesque Roundhouse centre that night. Needless to say it was well worth coming in on a Saturday for, particularly as we also got a visit from one of the surviving members of the aforementioned legendary punk group in the form of one Richie Ramone, who also had a gig that night across the street at Camden’s notorious Barfly venue. After Richie Ramone extended invitations to Ken Horne from Mariachi El Bronx to play a Ramones song at the end of his set – and to Team Rock to introduce his band on stage – we made it our mission to catch as much of all three bands’ performances as time permitted.

First up was Mariachi El Bronx (7), and the smile from ear to ear on singer Matt Caughtran’s face throughout their set symbolises just how much The Bronx enjoy donning the charro suits and performing as their mariachi counterparts. Their set consisted of popular songs from all three Mariachi El Bronx albums (Cell Mates / 48 Roses / Wild Fires) with the focus being on the two most recent albums, which is fine by us as they’re the best. At times the crowd seemed somewhat bemused by their cocktail of polka, jazz and Mexican folk (which is a shame since you would’ve thought Gogol Bordello fans wouldn’t be phased by such disregard for genre boundaries) but the band had everyone moving to the New Beat by the midway point of their set.

A cantina the Roundhouse is not, and North London is about as far from Central America as it gets, so maybe it’s too much of an ask for unfamiliar punters to be into something unique right off the bat. Fortunately, with a showman like Matt Caughtran as their host, it’s impossible for anyone in the crowd to feel alienated from the entertainment for long. On stage he’s as charming, funny and entertaining as he off, and you can’t help but warm to him and his band of mariachis, no matter what you might make of their modern take on traditional Latin American music – which just so happens to be as convincing, heartfelt and perfectly executed as anything you’re likely to see down in Mexico on the Dia de los Muertos.

We give Ken Horne time to get out of his sweaty charro suit and slip into normal attire (denim and leather, obviously) before escorting him over the road, fighting our way through the packed out Camden Barfly, and climbing the stage to welcome on the illustrious Richie Ramone (8). It’s an honour to have been asked to introduce such a legend, who was there at such a significant crossroads in rock ‘n’ roll history. It was inspiring to learn his time away from music has had no effect on his swagger or vitality as an entertainer. It’s obvious from the moment Richie gets up on stage what a bad ass he is, and why he was such a key component in one of the most important bands of all time.

He treats the full house of die-hard fans in attendance to a blistering assemblage of Ramones covers, as well as bunch of songs off his debut solo album Entitled, which is out right now on DC-Jam Records and contains re-imaginings of Ramones songs he penned during his tenure with the band alongside brand new compositions such as the album’s title track, single Criminal, and full blown garage rockers like Smash You – which takes home the prize for the best track on the album and is also one of the highlights from tonight’s set. It’s a testament to his song writing skills how well the new material stands up against Ramones classics like_ Somebody Put Something In My Drink_, and whilst the punks don’t pogo quite as hard or high to the new stuff, the legend more than holds court and maintains everyone’s interest during our time in his presence.

It’s then time to head back over to the Roundhouse, where we find Gogol Bordello (9) absolutely killing it in front thousands of rockers and random party people of all ages. Their multi-genre mash-up music means they’ve a truly universal appeal, and the live environment is where this band truly thrive. They’ve been honing their chops for many years now, playing literally hundreds of gigs every year ever since their inception back in 1999, and they’ve been winning the UK crowds over at festivals from Glastonbury to Reading & Leeds and Download ever since.

Fan favourites such as Gypsy Auto Pilot get the party well and truly started tonight, whilst set staples such as Start Wearing Purple and Pala Tute are saved for later in the set. Perfect then, for when the drinks are flowing and the whole of the downstairs area has morphed into a full-blown festival style rave-up. Alcohol and Think Locally ignite the carnival vibes further during the band’s show stopping five-song encore, which also includes Sacred Darling, Ultimate and a brilliant cover of Fugazi’s Blueprint with some assistance in the vocal department from Matt from Mariachi El Bronx.

Just like Matt Caughtran, Gogol Bordello’s frontman Eugene Hütz is as enigmatic and charismatic as they come, albeit in a very different way. He’s a true force of nature on stage, and the energy he projects touches everyone in the room tonight. Throughout the show, the rest of the band are also given the chance to shine. Whilst Eugene is clearly the leader and main songwriter in the band, their shows are well and truly a group effort, and a multicultural fucking chaotic one at that. There’s simply no other band like them on the planet, and if you’re looking to party on a Saturday night then you’d be hard pressed to find a better one.

Speaking of partying, after the Gogol Bordello gig came to an the end, the fun did not, as we headed over to Camden’s Underworld with Richie Ramone and the Mariachi El Bronx brigade for an official party DJed by one Andy Cairns of Therapy? fame. It wasn’t quite like CBGB’s back in the day, but it was the next best thing, and the perfect place to carry on drinking and dancing until the wee hours. From here things get a little hazy, but what we learned from the entire night’s experiences is that, in the words of The Exploited, Punk’s Not Dead. It’s alive and well, and is thriving all over the world.

Check out The Punk Show every Sunday at midnight. You can also listen to it via On Demand, too.