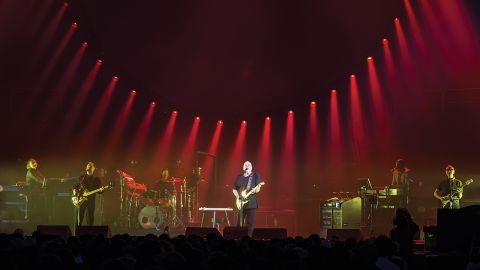 As the likelihood of Pink Floyd ever sharing a stage again appears to decrease with every passing year, it’s nights like these that leave us wondering what we might be missing – or if we’re missing anything at all. Roger Waters has just performed his grumpy version of the Floyd catalogue at a set of shows for Desert Fest in California, while in the other corner, David Gilmour’s doing very well with his slightly more avuncular take.

The main difference between the two sets is that Waters’ setlist was all-Floyd, and all pre-split, while Gilmour throws in a few post‑breakup tracks, as well as several from his own On An Island and Rattle That Lock albums. Otherwise, it’s a pure Pink Floyd experience in all but name: the band’s iconic ‘Mr Screen’ still dominates the backdrop as it did in 1974, and the newer songs are painted using the familiar Floyd palette.

It doesn’t always work: Gilmour’s The Girl In The Yellow Dress is a dreary jazz-lite filler, but elsewhere it’s all highlights, all the way. This starts with the guitarist gently coaxing the opening notes of 5am into life as birds tweet and dry ice swirls, before the relaxed funk of Rattle That Lock eases the show into second gear. There’s an utterly lascivious grind through What Do You Want From Me, a version of The Great Gig In The Sky featuring some frankly astonishing vocals from Lucita Jules, a loose-limbed romp through Money, and a rousing, rafter-wobbling take on Wish You Were Here.

The second half (“You’ve been a great audience… so far,” says Gilmour, in the manner of a teacher who fears his class may grow unruly) starts with a racing One Of These Days, paving the way for a truly exultant Shine On You Crazy Diamond. The ‘legendary’ Guy Pratt provides some furiously funky fingerwork on a gleeful version of Today, and sings alternate lines on a venomous Run Like Hell as bright lights burn and the band don shades. It’s extraordinary to think that he’s been playing these songs alongside Gilmour for almost as long as Waters did.

There’s something oddly comfortable about Gilmour’s show. The sound is perfect and, apart from the occasional vocal creak, the band’s performance is flawless. It’s adventurous music that lacks any sense of danger or mystery, and despite the truly spectacular setting, it never throws up any real visual surprises. And yet this music continues to possess an undeniable emotional wallop.

At the beginning of the climactic Comfortably Numb, four men in the rows in front of this reviewer instinctively encircle their partners’ waists, which is, at face value, an odd reaction to a song about alienation and sickness. But as that second solo climaxes, the audience leave their seats to move closer to the stage, the spotlights strafe the stalls, and Guy Pratt grins like a man who’d rather be nowhere else. It’s hard to look at him and disagree.