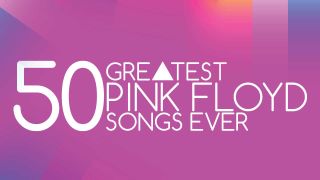 From their earliest days as one of swinging London's most forward-thinking underground bands to their best-selling albums of the 70s and 80s, Pink Floyd have carved out a unique career.

They're a band who've altered peoples' perceptions of music itself, showing that rock'n'roll was about much more than three minute singles and Top Of The Pops.

For Pink Floyd music was about adventure, and about exploring the limits of musical possibility, and about railing at the world, and about not adhering to expected music industry norms, and about always, always refusing to compromise.

Remarkably, Pink Floyd did all this while becoming a once-in-a-generation kind of commercial juggernaut. Sure, there were fights along the way, and the band member's relationships are tainted with bitterness to this day. But from such tension came great, transcendent, unforgettable beauty, from The Dark Side Of The Moon to The Wall and beyond.

These are Pink Floyd's 50 greatest songs, as voted by you.

Pink Floyd’s 1975 song Welcome To The Machine has always been the moment listeners first realised how disenfranchised Roger Waters had become. But it didn’t happen overnight. The lyrics to Free Four were thoroughly bleak, but disguised in a brisk, almost country rock song, released as a single in the US, and included on Obscured By Clouds, Floyd’s 1972 soundtrack to the French art-house film La Vallée.

Free Four is the first Pink Floyd song to reference Waters’s father. Eric Fletcher Waters was a soldier in the 8th Royal Fusiliers, killed during the Second World War when his son was just five months old. ‘I am the dead man’s son,’ sings Waters, ‘And he was buried like a mole in a fox hole.’

Waters’s questioning lyric continues over the song’s near hypnotic, seesawing rhythm and David Gilmour’s spitting guitar solos. ‘You shuffle in gloom to the sickroom/And talk to yourself ’til you die,’ offers the final pay-off line in a song whose lyrics are as despondent as its music is upbeat.

In complete contrast to preceding track, Breathe, this is Pink Floyd getting sonically way out there. An instrumental that builds on a sequenced synth pattern, it’s allegedly a musical interpretation of keyboardist Richard Wright’s acknowledged fear of flying.

It certainly has to ability to give you the sweats, and is probably best left alone if you’re in an advanced state of paranoia.

The second track from The Wall is almost a segue of the opener, telling the story of the central Pink character growing up (opening with the closing crying child from In The Flesh).

All runs relatively smoothly, lyrically and musically, until Roger Waters takes over from David Gilmour on vocals, warning of “the thin ice of modern life…”, and soon all hell breaks loose with a huge heavy rolling riff reminiscent of In The Flesh.

Late in the Wall sessions, a fuming Waters penned this bruised piano ballad in a single evening, having risen to Gilmour’s challenge to write “something fantastic”.

If the music was ripe with sorrow and solitude, the lyric was even more so, seemingly nodding to every rock star burn-out cliché in the book – and surely referencing the departed Barrett with its vision of a lost soul with “wild staring eyes” and “the obligatory Hendrix perm”.

From the soundtrack to Barbet Schroeder’s psychedelic drug-fest More, which was the first full-length Pink Floyd album not to have any involvement from founder member Syd Barrett.

Written by Waters and sung by David Gilmour, The Nile Song is one of the heaviest songs Pink Floyd ever recorded, almost a proto-version of Not Now John. It was released as single in France, Japan and New Zealand, and was covered by Floyd fans Voivod on their 1993 album The Outer Limits.

It’s bracing to remember Floyd this way, savaging the amps like a petulant garage band. Waters’s lyrics are suitably damaged too, the song’s protagonist caught under the spell of a dark sorceress: ‘She is calling from the deep/Summoning my soul to endless sleep/She is bound to drag me down.’

The opening track from the epic double concept album The Wall, and named after the 1977 Animals tour on which, at the final show in Montreal Waters legendarily spat at a member of the audience, an event that sparked the alienated rock star concept. It’s certainly an explosive start to the album, all crashing keyboard power chords and blazing guitars.

The original riff was taken from what would become Waters’ solo album The Pros And Cons Of HitchHiking, which he had written concurrently with The Wall. When performed live, backing musicians made to look like Floyd performed the song, as the “surrogate band” mentioned in the lyrics.

Gilmour was convinced this Atom Heart Mother highlight had already been written, but he was wrong – it just felt like you’d known it all your life.

“It’s one of those songs where the whole thing fell together very easily,” he told Uncut. “I remember thinking at the time, ‘What have I ripped this off? I’m sure it’s by the Kinks or someone’. But since whenever it was – ’68, ’69 – no one has ever yet said, ‘It’s exactly like this.’ it’s a nice lyric, I’m very happy with that.”

43. A Saucerful of Secrets

Roger Waters remembers A Saucerful Of Secrets as “a turning point. It gave us our second breath. It was the first thing we’d done without Syd that we thought was any good”. Gilmour remembers that “it started with Roger and Nick drawing weird shapes on a bit of paper. We then composed music based on the structure of the drawing. My role I suppose was to try and make it a bit more musical, to create a balance between formlessness and structure, between disharmony and harmony”.

Nick Mason believes that the track that ended up giving the album its title “contained ideas that were well ahead of the period and very much a route that we have followed. Even without using a lot of technique, without being particularly able in our own right, we were finding something we could do that other people hadn’t tried, like provoking the most extraordinary sounds from a piano by scratching around inside it.”

As Gilmour puts it, “It was the first clue to our direction forward. If you take A Saucerful Of Secrets, Atom Heart Mother and Echoes, they all lead quite logically to Dark Side Of The Moon.”

The young Gilmour never had much confidence with lyrics, but the sci-fi novels of Arthur C. Clarke got his quill scratching, powering the high-water mark of 1972’s Obscured By Clouds and the last song written solely by the guitarist until A Momentary Lapse Of Reason.

The flashpoint at 1:30 when the song breaks from synthy swoosh into tough interstellar R&B remains a moment to conjure with – and the guitar solo was often even more momentous live.

As the flip to 1967’s Apples And Oranges, the Wright-sung/written Paintbox fell between the cracks, but deserved better. Like the befuddled narrator – who “must admit I had too much to drink” – the song never quite seems to find its centre of gravity, lurching between ominously clattered acoustics and rattled drums.

It was a fair reflection of a band rebooting after their frazzled leader’s exit. “Paintbox was done soon after Syd left,” Wright told a fan Q&A, “and we still hadn’t established the way the band was going to work.”