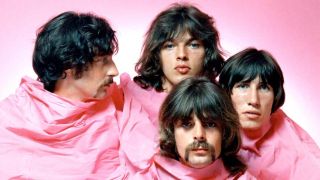 Pink Floyd: the songs that show off their experimental side (Image credit: Michael Ochs Archive\/Getty)

The unprecedented success of Dark Side Of The Moon turned Pink Floyd into one of the biggest bands of the 70s and beyond, a status consolidated by Roger Waters’ magnum opus The Wall a few years later. But veer away from the more well known songs, and you’ll find another Pink Floyd entirely – one willing to explore and experiment with form and content, removed from mainstream concerns. That’s the Floyd we’re interest in here – and these are 10 of their overlooked classics worthy of greater scrutiny.

A curio taken from the soundtrack to Michelangelo Antonioni’s 1970 movie Zabriskie Point, Crumbling Land finds Pink Floyd refracting themselves through a musical prism and emerging as something close to a West Coast pop group. Skipping beats and country-style finger-picking might not be typical Floyd territory but they pull it off with panache.

Purists argue that by 1987’s A Momentary Lapse Of Reason, Pink Floyd was effectively a David Gilmour solo vehicle, and with Rick Wright and Nick Mason relegated to cameo roles they might have a point. However, this cavernous guitar overture, reputedly recorded in a single take, digs long and deep into the soul, and stands as one of the high-points of the post-Roger Waters era.

The late Rick Wright doesn’t get enough credit for his sharply observed songwriting which often comes with a bitter-sweet tang. Summer ’68, from 1970’s Atom Heart Mother, is a case in point: behind the jaunty beat, banks of sunny harmonies, poppy piano and the interjection of brassy fanfares lurks a caustic confessional detailing casual on-the-road sex with a side order of self-loathing.

Strictly speaking Floyd’s second single isn’t an obscurity, but it deserves more love than it gets. The instrumental break is a brilliant example of how to inculcate the avant-garde into a hit single. With Mason and Waters tethered to earth, Wright and Syd Barrett hurtle spaceward in an explosion of billowing organ and incendiary flashes of ascending glissando guitar created, rumour has it, with the aid of a plastic ruler.

Recorded as Floyd finally fractured into psycho-drama and acrimony, 1983’s The Final Cut has a mixed reputation. Yet Roger Waters’ grim meditation on life and mortality contains many powerful moments, particularly the title track. With obvious allusions to Comfortably Numb’s undulating arpeggios, Waters’ tortured, angst-strewn vocal is balanced by Gilmour’s brief but transcendent solo. An apt swansong for the Waters era, on many levels.

Floyd’s gentler moments are easily overlooked, not least A Pillow Of Winds, which had the misfortune to find itself overshadowed by One Of These Days and Echoes on 1971’s Meddle. Yet the pastoral idyll of softly meandering guitars and luminous organ drifts masks a Waters lyric shot through with darker images of loss, suggesting not everything is as blissful as it might first appear.

Roger Waters would take personal alienation to its logical conclusion on The Wall, but he was exploring the existential angst that comes with fame as far back as Cymbaline, from the soundtrack to the film More. With lyrics about ‘your manager and agent are both busy on the phone, selling colour photographs to the magazines back home’, it showed that even at this early stage, Pink was beginning to feel the strain.

With its dream-like opening, Floyd showcased their early mastery of mood on this track from the More soundtrack. Building from swathes of pensive organ and shimmering gong, it morphs into a brisk, pulsating groove that inhabits the same sonic territory as German experimentalists Can.

A brief sketch with epic aspirations from Obscured By Clouds. Wright’s magisterial intro foreshadows Wish You Were Here, though it the jagged guitar, the VCS3-generated metronomic pulse and soulful organ lines bear a more obvious resemblance to Time from Dark Side Of The Moon – something that prompted the band to drop it from their setlist.

For all its shortcomings, the oft-dismissed studio side of Ummagumma contains some overlooked gems, not least this Gilmour solo spot that sometimes formed part of their live suite, The Journey. The guitarist’s languid slide runs gradually transform into free-fall tailspin, though the final song – when it emerges – is a smouldering, stately classic.

Pink Floyd Quiz: The Dark Side of the Moon