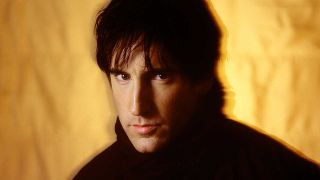 In 1997, Trent Reznor was named one of Time Magazine's 25 most influential people, sharing the honour with the cartoon character Dilbert and then US Secretary Of State Madeline Albright. Time called Reznor 'the anti-Bon Jovi'. His 'vulnerable vocals and accessible lyrics' led an industrial revolution: he gave the gloomy genre a human heart.

Reznor's music was filthy, brutish stuff, oozing with aberrant sex, dark melancholy and violent misanthropy. But to the low-spirited, his music proffered pop's perpetual message of hope: there is worse pain in the world than yours. It is a lesson as old as Robert Johnson's blues.

Reznor was the latest in a long line of brooding, dark romantic figures that included David Bowie, Lou Reed, Jim Morrison, Mick Jagger and Keith Richards. He was also an overlooked recording genius; a studio nerd who pioneered a polished, aggressive metal sound that is still ubiquitous today.

Throughout the 90s, Reznor transcended genres and tribes: he appealed to goths because of his emaciated, pale demeanour; he appealed to fledgling nu-metalheads who loved the abrasive guitars and in-your-face beats; he appealed to 'cyberpunk' types to read Wired because it seemed that he appeared to be orchestrating the bleak future world of frazzled tech depicted by William Gibson in Neuromancer.

Before the rise of his protégé Marilyn Manson, he was the country's most popular nihilist. That reputation rested largely on his masterpiece, the sprawling black hole of despair that was Nine Inch Nails' The Downward Spiral.

Even today you can listen to The Downward Spiral and still discover things that you had never heard before. It's almost as if the album has kept on growing and changing, updating itself between plays.

Nine Inch Nails' debut album Pretty Hate Machine, recorded in 1988, was essentially an electronic work heavily influenced by Skinny Puppy, Ministry And Depeche Mode, with Reznor as a one-man band, creating all the songs and sounds in the studio. The abrasive follow-up (of sorts), Broken, introduced distorted guitars and a metal sensibility. Those appealed largely to a cult market, the still-thriving industrial underground.

But by the time he made The Downward Spiral in 1994, the 'mainstream' of metal – under the influence of everyone from Rage Against The Machine and Nirvana to post-Black album Metallica – was moving towards where Trent Reznor had already staked out his territory.

In 1992 Reznor moved to Los Angeles. He had just signed a deal with Interscope that gave him the artistic freedom he needed to work on his third album. He wanted a property where he could set up his own recording studio.

The Downward Spiral was one of the first albums to be recorded entirely using state-of-the-art digital technology. Rather than just putting the band in the studio, recording the instruments and mixing it together, sounds were recorded and stored on a computer hard drive rather than on tape, and they could then be digitally altered.

One of the beauties of digital recording is that it can really be done anywhere. The location Reznor wanted had to be sufficiently isolated, and large enough to accommodate the gear and any collaborators, like producer Flood and his main collaborator/assistant, drummer Chris Vrenna, whose job was to sift through hundreds of videos for samples to be used on the album.

Reznor found a ranch-style bungalow to rent on Cielo Drive in the Hollywood Hills, a beautiful, picturesque location set in the super-rich part of Los Angeles populated by movie executives, actors and musicians. The house had had some famous tenants in the past, most notably disgraced film director Roman Polanski his young wife, actress Sharon Tate, back in the 60s.

One sultry night in August 1969, while the heavily pregnant Sharon and her friends were turning in for the night, a group of hippies broke in. In the space of an hour Sharon watched as they slaughtered three of her friends in front of her. Then they killed Sharon, ripping the unborn baby boy from her womb. She was alive to see this. They wrote in her blood the words ‘Pig’ and ‘Healter Skelter’ (sic) on the walls and door.

Reznor had moved into the house made famous by the Charles Manson murders.

“It’s a coincidence,” he told Rolling Stone at the time. “When I found out what it was, it was even cooler.”

Later he admitted that he had in fact deliberately chosen the location for the bad vibes, but regretted this after a meeting with Sharon Tate’s sister Doris.

At the time they were recording in the house, Vrenna and Reznor nicknamed the studio ‘le pig’, alluding to the word ‘pig’ scrawled on the wall in Sharon Tate’s blood. One of the strongest tracks on the album was March Of The Pigs, although Reznor denied that there was any connection between this and Manson.

Reznor had been listening to a lot of David Bowie, and the influence of Hunky Dory, Bowie’s 1971 album on which he attempted to redefine the way pop songs were written – something that appealed to Reznor – had percolated through.

While The Downward Spiral was not planned as a concept album, there are linking themes and recurring motifs in the songs. Reznor had been keeping notes on his inner state since his chaotic booze-and-chemical-fuelled stint on Lollapalooza. This provided the conceptual backbone for the songs.

“It is personal experiences, but it’s wrapped up in the highly pretentious idea of a record with some sort of theme or flow to ’em, and it was meant to be... it’s become kind of a dated 70s concept. But some of the records that influenced me a lot on this album, like [David Bowie’s] Low and even The Wall – I’m sure I’m ripping off Pink Floyd. In fact I know I am.

“There’s records, although they may appear dated today, that try to do things that are more exciting to me than, ‘Here’s my video track and here’s my dance song and here’s my power ballad.’ All that kind of disposability. It was just me, bored, trying to come up with something I kind of wanted to set the parameters to work within, to focus more.”

The expectations for The Downward Spiral were almost crippling. Pretty Hate Machine and Broken had, in a sense, both been produced in secret. But the constant pressure from fans, the media, admirers and other bands asking when the new album was out, how it was going, what it would be like, what the songs would be, started to take their toll.

The album was more of a struggle to make than he expected. The original intention had been to make the album quickly. Reznor cited the example of Nirvana, who had gone into the studio and made Nevermind in two weeks. But the process was different for him, and soon his new record company, Interscope, were expressing ‘concern’ at the amount of time the album seemed to be taking to make.

He later said: “I just wanted to kill myself. I hated music. I was like, ‘I just want to get back on the road because I hate sitting in a room trying to, trying to... just scraping my fucking soul.’ Exploring areas of your brain that you don’t want to go to, that’s painful. You write something down and you go, ‘Fuck. I can’t say that. I don’t want people to know that.’ It’s so naked and honest that you’re scared to let it out. You’re giving a part of your soul away, exposing part of yourself. I avoid that. I hate that feeling of sending a tape out to someone: ‘Here’s my new song. I just cut my soul open. Check it out. Criticise it’.”

Reznor wanted to finish the album and get the hell out of LA and back on the road.

“That’s the stupidest fucking reason for doing an album I’ve ever heard,” American Recordings boss Rick Rubin told Reznor when they ran into each other. “Don’t do it until you make music that it’s a crime not to let other people hear.”

Somehow shaken by Rubin’s advice, Reznor knuckled down and, taking time out to work with Manson, delivered the finished album almost a year after he had started work on it. The flurry of writing and recording produced 16 songs, and some leftovers that would crop up on B-sides or would be reworked as material for remixes for Nine Inch Nails as well as other artists.

The songs were like frontline reports from the battlefield of Trent Reznor’s psyche. That they were classic songs of negativity, angst, despair and hatred would come as no surprise. But Reznor’s voice – previously heard only through a bank of distortion and effects, screaming – was transformed, seductive and even sweet.

From the deceptively quiet intro of Mr Self Destruct, through grandiose almost-pop of Closer, to the tenderness in the hate-ballad Piggy, it was clear that The Downward Spiral was an album with light and shade, with blended colours rather than just blocks of bold primary hues. There was enough of the cyber jack-beat on Heresy and the intense title track itself to connect Reznor to his earlier work and still have him strictly filed under an ‘industrial’ music category, but the truth of the matter is that he wasn’t so much part of a different genre as an entirely new game altogether.

Reznor had made a great album that could only be listened to in small doses. The Downward Spiral was something magnificent that took you on a journey all the way to the heart of darkness.