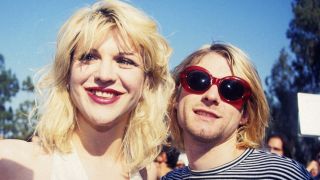 Courtney Love says work on a biopic about her late husband Kurt Cobain should get underway within the next year.

The Hole frontwoman says she will have a say in who plays the role of the Nirvana hero and adds that she has already seen some of the candidates’ demo reels.

Love tells the Philippine Daily Inquirer: “The biopic should start within the next year or so. Creative Artists Agency directly sent me actors’ reels.

“That was really tough because these boys are so pretty, so cute. I won’t name names because I don’t want to jinx it for anyone but these are 25-year-olds who are blond, gorgeous and the new Brad Pitts.

“There’s a ton of those. Some are really good actors, not just pretty faces. I don’t want to be the person who makes that decision. Let’s leave that to the agents. But I will have a say in it.”

This year marks the 20th anniversary of Cobain’s suicide. He would have been 47 in February.