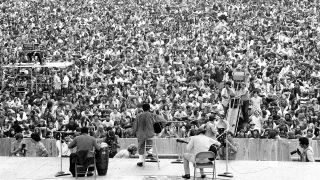 Michael Lang – the co-founder of Woodstock – has announced that the festival will return later this year to mark the 50th anniversary of the original event.

The three-day festival will be held at the Watkins Glen International Raceway in New York between August 16-18 this year.

A list of artists won’t be announced until ticket go on sale next month, but Lang tells Rolling Stone that more than 40 artists have been signed up.

Lang tells the website: “It’ll be an eclectic bill. It’ll be hip-hop and rock and some pop and some of the legacy bands from the original festival.”

He also reports that new bands will celebrate “artists from the original Woodstock,” which could include Jefferson Airplane and Janis Joplin.

Lang continues: “Having contemporary artists interpret that music would be a really interesting and exciting idea. We’re also looking for unique collaborations, maybe some reunions and a lot of new and up-and-coming talent.”

It’s also reported that steps will be taken to avoid the muddy riot of Woodstock 94, with ‘glamping’ accommodation onsite and an improvement in the toilet facilities.

The Watkins Glen International Raceway was the site of Phish’s Curveball festival, which had to be cancelled at the last minute in August last year due to severe flooding – but Lang doesn’t foresee similar problems for Woodstock.

He continues: “At Woodstock 94 in Saugerties, New York, we had a different sort of water issue since the town didn’t have a big enough reservoir.

“We had to put up two, one million gallon temporary tanks and filled them over the time. That’s the solution we’re going to use this time to make sure the water is potable.”

The event will also be streamed online for this unable to attend, with further details set to be revealed in due course.

Here are 50 things you didn't know about Woodstock.