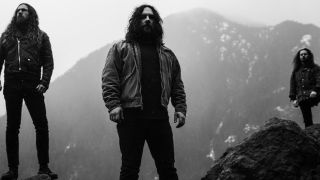 Wolves In The Throne Room have released a video for their new track Born From The Serpent’s Eye exclusively with Metal Hammer.

It’s a shortened version from the one that will appear on the band’s upcoming album Thrice Woven, which will arrive on September 22 via their own Artemisia Records and is the follow-up to 2014’s Celestite.

Wolves In The Throne Room tell Metal Hammer: “This is our first video. We lit a bonfire and blasted through the first third of our song Born From The Serpent’s Eye.

“You’ll have to listen to the full track to hear Anna von Hausswolff’s glory. This is the first time we’d played the song with new guitarist Kody Keyworth and it fucking slayed. Peter and Nico captured the magic. May the good fires blaze!”

Keyworth is joined in the lineup by guitarist and vocalist Nathan Weaver and drummer and bassist Aaron Weaver. Von Hausswolff guests on the album along with Neurosis singer and guitarist Steve Von Till and harpist Zeynep Oyku.

The band will head out on the road throughout August in support of the new album. Find the full list of tour dates below, along with the Thrice Woven tracklist and cover art.

Von Hausswolff also features in the new issue of Prog magazine in an article about five women currently making their mark on the progressive scene.

Wolves In The Throne Room: Celestite