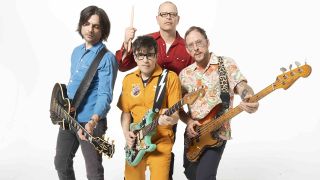 Formula 1 organisers have been approaching artists, DJs and drivers this season, asking them to curate their very own playlists for each Grand Prix on the calendar.

And with the Hungarian Grand Prix set to take place this coming Sunday (July 19) it’s Weezer’s turn to create their own musical mix – and they’ve come up with a 20-track selection which is guaranteed to take pole position.

They’ve rummaged through the catalogues of some of their favourite artists including Motorhead, Green Day, Van Halen, Motley Crue, Queen, Ratt, Beastie Boys and Twenty One Pilots.

And as if that wasn’t enough, they’ve even thrown a couple of their own tracks into the mix, including their cover of Black Sabbath classic Paranoid.

F1 say: “The sound of F1 just got even better. To the sound of roaring V6 engines you can now add massive beats, hypnotic basslines and driving guitars from the world’s best musical acts, all courtesy of F1 Tracks, the new music playlist specially curated for fans of the pinnacle of motorsport.

“Available to fans across Spotify, Apple and Deezer, F1 Tracks will be updated on a weekly basis, uniting global superstars with the sounds of F1.

“Filtered according to four key categories: Pace, mechanical, spirit and fan, this unique set of principles will produce a bespoke and dynamic playlist, which embodies F1 and is distinctive from other weekly streamed playlists.”

In May this year, Weezer praised those on the frontline of the coronavirus pandemic with a video for their single Hero. The song will appear on the band’s upcoming studio album Van Weezer, which has been pushed back to 2021.

Weezer were also forced to move their Hella Mega Tour with Green Day and Fall Out Boy to next summer.