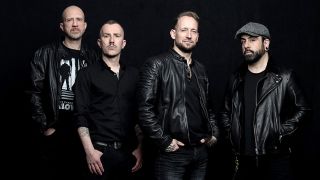 Volbeat have released a video for their brand new single Last Day Under The Sun.

It’s the latest track taken from the band’s upcoming album Rewind, Replay, Rebound which is set to arrive on August 2 through Vertigo Records. Volbeat shared the track Leviathan from the record last month.

Vocalist and guitarist Michael Poulsen says the lyrics were inspired by a book he read by Johnny Cash.

Poulsen explains: “When I read his book, he went through tough times with alcohol and drugs. He walked into a cave to lay down to die. But he wakes up and feels like he has been given a second chance.”

As for his thoughts behind the new album, Poulsen adds: “The whole point for us going into the studio, is because you still have something to prove – not just for the fans, but mostly for yourself.

“We would not be able to do this record if it wasn’t for the work we have done in the past. No matter how old the band gets or how many records we do, there is always going to be that signature sound.”

Rewind, Replay, Rebound will be released on standard formats, and on 2CD deluxe edition, a special deluxe edition box set, and transparent and blue vinyl.