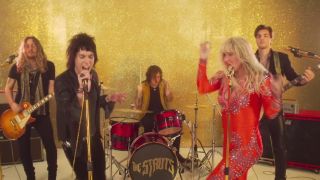 The Struts have teamed up with pop star Kesha for a brand new version of their recent single Body Talks.

The hotly-tipped British rock band re-recorded the song with longtime fan Kesha in Los Angeles. The singer appears in a new video for the song, gyrating alongside flamboyant singer Luke Spiller as confetti rains down on them.

“They’re keeping the spirit of classic rock and roll alive with their wild energy and sexy style,” enthuses Kesha. “It’s a song made for my favourite activity: boogieing.”

The song appears on The Struts forthcoming second album, set for release later this year. The Derby band recently supported Foo Fighters on their US tour, which included an appearance at Madison Square Garden.