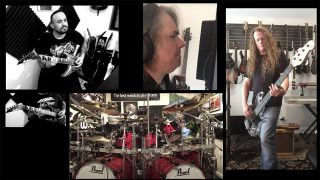 Members of Overkill, Exodus, Shadows Fall and Angor have got together remotely while in lockdown to cover Megadeth classic Wake Up Dead.

The four-piece wasted no time in driving through the Megadeth track, which kicked off Dave Mustaine and co's 1986 album Peace Sells… But Who’s Buying?, with Bittner saying: “ Just a bunch of metalheads jamming a cover for fun under quarantine.”

Earlier today, we reported that Charlie Benante had reunited with his old Anthrax bandmate John Bush to release a lockdown video for the track Packaged Rebellion.

The song originally appeared on Anthrax album Sound Of White Noise – Bush’s first record with the band back in 1993.