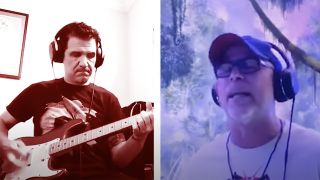 Charlie Benante has reunited with his former Anthrax bandmate John Bush for a lockdown version of their track Packaged Rebellion.

The song originally appeared on Anthrax’s 1993 album Sound Of White Noise – the band’s first album to feature Bush on vocals, with the pair deciding to record the song to mark the record’s 27th anniversary. Check out the video below.

Drummer Benante, who plays guitar in the video, says: “An intimate version from the Sound Of White Noise album with my friend. Happy anniversary. If you like the song, please just enjoy it for what it is and nothing else.”

Bush was brought into Anthrax to replace Joey Belladonna and was with the band  between 1992 and 2005. He also had a short second spell in 2009, before Belladonna was brought back into the fold.

Aside from Sound Of White Noise, the Armored Saint singer also appeared on Stomp 442, Volume 8: The Threat Is Real, We’ve Come For You All and The Greater Of Two Evils.