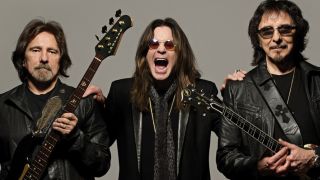 Black Sabbath have released a live video of their final performance of Paranoid.

The footage was captured at the band’s last-ever show at Birmingham’s Genting Arena in February and was the last track they played together before they took their final bow.

It’s been lifted from the DVD and Blu-ray of Sabbath’s concert movie The End which will also be released on CD and vinyl on November 17 via Eagle Rock.

Speaking previously about the experience, Sabbath said: “To bring it all back home after all these years was pretty special. It was so hard to say goodbye to the fans who have been incredibly loyal to us through the years.

“We never dreamed in the early days that we’d be here 49 years later, doing our last show on our home turf.”

The End features live scenes from the concert along with backstage footage and studio performances of tracks they didn’t play on the night.

The End is now available for pre-order. Find the tracklist below.

5 things we learned from Black Sabbath: The End Of The End