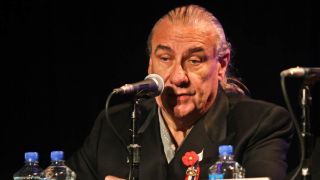 Bill Ward has described his estrangement from Black Sabbath as “very sad” and repeated his demands for an apology from Ozzy Osbourne.

The drummer is locked in a war of words with Ozzy which seems unlikely to be resolved. Ward says he still needs a “signable contract” and a full, public apology before he’ll consider a return to the fold.

And he adds that the impasse is leaving him sad and frustrated.

Asked if he could play with Sabbath again, Ward tells 106.5 WSFL: “If everybody could get on the same page – my page. I’ve been quite pronounced about my page, which is a signable contract and an apology over certain issues that Ozzy said about me that weren’t true.

He adds: “I’m very, very sad by all the fan reactions and the way that things have split and gone different ways and everything else. It’s not nice at all to be in this position, and it’s not an easy responsibility for me to maintain when uncountable amounts of people are angry with my decision-making process.”

Ward insists he’d love to get back behind the kit for Sabbath should they go back on the road.