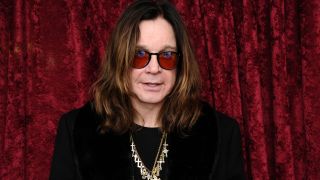 Black Sabbath’s farewell looks as though it won’t take place until 2016, according to frontman Ozzy Osbourne.

The band’s manager, and Ozzy’s wife, Sharon said recently that Sabbath’s farewell show would take place at Ozzfest Japan in November. But that has since been changed to an appearance by Ozzy Osbourne and friends, with no reason given for the switch.

And Ozzy has since confirmed comments he made last year that Sabbath would record a final album to follow up 2013’s 13 and head out on a farewell tour. And he says that whatever happens with Sabbath, his solo career will continue.

He tells a press conference at Monsters Of Rock in Brazil: “The plan is that next year we’ll do the final Black Sabbath tour and album. I’m not stopping… my wife spends all my money so I can’t.”

Ozzy says that the plans “could change,” and adds: “We all live in different countries and some of them want to work and some of them don’t want to, I believe. But we are going to do another tour together.”

Estranged drummer Bill Ward has seemingly ruled out a return to Sabbath for any future shows or studio sessions. This month he continued his war of words with the singer, saying: “I can’t love you back.”