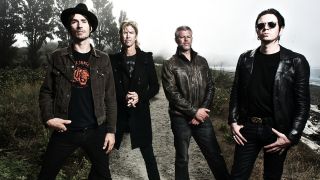 Walking Papers have released a short video trailer for their upcoming album WP2.

Vocalist and guitarist Angell says: “This record has exceeded my expectations of what I thought that might be. It perfectly captures the raw, explosive energy of a band primed from extensive touring while at the same time achieving the polish and elevation that comes from experimenting in the studio.”

He adds: “Walking Papers is happier than a tornado in a trailer park to have our second record see the light of day via Loud & Proud Records.”

The band have also confirmed that they’ll hold a release party at The Crocodile in Seattle on January 27.

WP2 is available to pre-order through PledgeMusic.