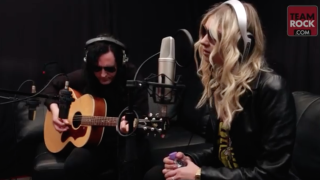 The Pretty Reckless vocalist Taylor Momsen and guitarist Ben Phillips recently paid a visit to TeamRock Radio during their UK tour. While they were there, they performed a stripped down version of House On A Hill. Check out the video below.

The song is the fourth single to be taken from their latest album, Going To Hell, which was released in March. The band also recently revealed that they would be embarking on an month-long tour of North America in February with Nickelback.