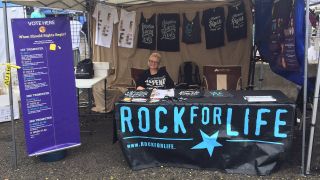 Vans Warped Tour boss Kevin Lyman says the furore over a pro-life charity’s presence at the festival is nothing but an attempt to discredit the event.

Lyman tells TeamRock that “a small group” of people regularly attack the Vans Warped Tour and that this is just the latest attempt to cause a stink.

Fans criticised the tour for allowing pro-life group Rock For Life to set up a stall at the Camden, New Jersey, leg at the weekend.

The charity asked people at the festival to answer the questions ‘When should rights begin?’ Rock For Life is against abortion, saying: “We believe that each and every human being is a person from his or her biological beginning.”

On Twitter user, @trutitty, writes: “Pretty clear that @rockforlife should not be on Warped Tour.”

Another, @hauntinggg, adds: “@rockforlife get off Warped. It’s supposed to be a safe space”

Rock For Life claims to have the support of a large number of rock bands and they are set to have a presence at future stops on the Vans Warped Tour.

Lyman says: “There over 100 non-profits tabling at some point of the tour this summer. This is one of them.

“If they are being respectful and not promoting hatred, racism, or bigotry then I think they should be allowed.

“We do have planned parenthood scheduled for some stops down the road and hopefully I will hear from others.

“Honestly, a small group who is looking to attack the tour has found their reason. I am actually surprised that it took them so long to find their yearly cause.”

“Each year it will be something and as I said if they have groups with opposing views they are welcome. If they would like to come and protest at the tour I would give the credit.”

The Vans Warped Tour runs through until August 13 in Portland, Oregon with Sum 41, Masked Intruder, Every Time I Die, Atreyu, Issues and Good Charlotte among the acts on the bill.

Bullet For My Valentine, Atreyu for Vans Warped Tour 2016